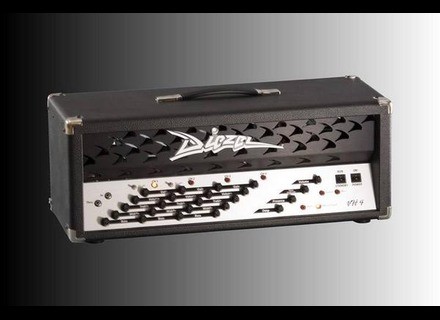 Buy this productView price information >
View other reviews for this product:
The Diezel VH4 is an all-tube monster amplifier that can deliver between 90 and 160 watts of power, depending on what tubes are in it. Over the years the amp has come stock with different tube complements as owner/designer Peter Diezel worked through reliability issues with tube manufacturers and tone requests. It's my understanding the amp used to come with 6550s, then was switched to EL34s for quite a while, and now ships with KT77s. The thing is, it doesn't matter. Any tube in this amp works equally well, it's just all about the tone you're looking for.

The VH4 has four channels that go from spanking clean to brutally-saturated over-the-top gain madness. Each channel has an independent Volume, Gain, Bass, Middle, and Treble control, and are also global "Deep" and "Presence" controls. The VH4 has both a serial and parallel effects loop, as well as a channel insert for each channel. All of these are controllable via on-board MIDI, including a global Mute function. Both channel 1 and channel 2 have a "bright" switch to further shape your tone.

It's actually hard to get a bad sound out of this amp. Go ahead, try. Once you get used to the diagonal layout of the knobs per channel, the amp is fairly straightforward. Set your channels where you want the sound, program the MIDI if you want, and go play 'till your heart's content. The Manual is clear and simple, and Diezel customer service is second to none. Peter Diezel himself will personally answer customer service questions and help people, even those who have purchased second-hand, get the best tone possible out of their Diezel amps. The manual goes into fairly deep detail, for example, going so far as to point out in what frequency ranges the "Deep" and "Presence" controls work and affect (80Hz and 4Khz, respectively).

I mainly play Dimarzio equipped Neal Moser guitars, Ibanez guitars, and George Riszanyi custom guitars through all of my amps. This amp is simply a monster. Channel one is the "clean" channel and can get you warm jazz tones to country spank, all based on how YOU decide to set the amp, and with the gain cranked starts to get you into the dirt. Channel 2 can overlap with the lower region of channel one but as you increase the gain you run the gamut from gritty blues to 70's rock to 80's metal. Once you hit channel three you've entered the signature "Diezel" sound and the amount of gain on tap is staggering. With the gain lowered, you can keep the 70's/80's vibe and have the signature Diezel sound, or you can push the gain up and have saturated bliss. Channel four is simply over the top. Fluid high-gain is what's on the menu here--punishing rhythms and singing leads are nearly effortless. Whatever sounds you want, the VH4 can serve them up, including everything you want to hook up.

This is one of the most well-made and sturdy heads I've ever owned. It also weighs a ton. Make no mistake--this is a serious piece of hardware and the price tag reflects it, but if you're looking for that "all-in-one" amp the Diezel VH4 just may be the last amp you'll ever have to buy. If something were to happen to mine, I would without a doubt have another. This is definitely an amp you don't want to be without.
Did you find this review helpful?yesno