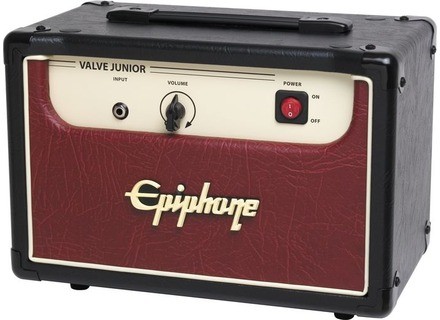 View other reviews for this product:
This amp by Epiphone is a 5 watt tube amplifier head with just a single volume control. It was touted as being great for recording or perhaps small shows if put through a decently sized cabinet. It's got no other controls, no effects loop, no reverb, no anything... just a volume control and a power switch. It's powered by a single EL84 tube and really just is what is as far the amp. Some say it makes a great modding platform, and Epi's even done a few of them over the years like that too.

Getting a good sound is okay considering there is only one sound - on. It gets slowly more overdriven and louder as you turn it up but the core tone stays the same. Since there are no EQ controls, the tone is pretty much going to be factored by your guitar, cabinet and the volume you're playing at. You could run pedals in front of it to change the tone as well, but of its own merit the amp doesn't offer much flexibility.

This amp sounds the same with whichever guitars I've tried. The tone is a little flat for my liking and I'd have liked at least a tone control in order to tame some of the brightness or add some more in. Of its own devices the amp sounds fairly generic and boring... I'm not particularly a fan of sterile sounding cleans with no control over the amount of breakup. I admire the attempt but I think only having a volume control is a serious limitation to this amp and it definitely turns me off. It doesn't really do much other than that one quasi broken up clean sound unless you modify it or use pedals.

All in all I think the Epiphone Valve Junior is an admirable attempt, but it falls short of the mark for me. The lack of tonal flexibility, the rather flat and lifeless sound and the fact that it's so dependent on other tonal factors make it really unappealing to me. They're about $150 new which is overpriced to me considering you're getting a box with speaker/input jacks and a volume control. If you are looking for something to mod, maybe try one of these, but in its stock form it's really not worth much, at least to me.
Did you find this review helpful?yesno