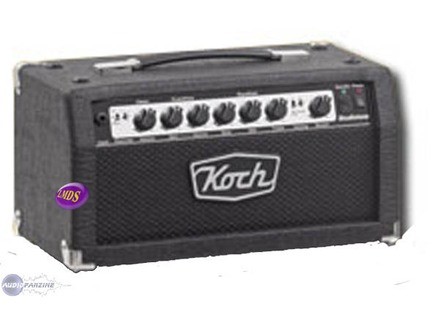 The front panel is intuitive and very traditional.
We put all the pots tone at noon, and presto you already have a great sound. It only remains to refine.
We listen to once or twice the effect of voicing switches (very useful especially to go from a Telecaster to a Les Paul ...) here and roll!
The rear panel is a bit less common and far more outputs provided.
Direct output to the console is also equipped with voicing switches - with pictograms moreover not always very explicit, but still just one or two trials for dipping.

If necessary, one can resort to the manual, very clear and complete. I just wish to have detailed diagrams as Fender

I chose this primarily for his head clean sounds and / or hot and / or crystalline with a good balance between low, mid and treble. Nothing to do with sounds so called "modern" type Transatlantic Mesa, Vox Night Train or Hughes & Kettner that I find highly aggressive with a sound spectrum resembling that obtained by plugging the guitar direcement on a console - ugh!
At very high volume (at 24:00, there is hardly in the room), the clean channel does crunche only very discreet. With corrections and voicing switches you approach sounds like Fender Blues Deluxe or Twin (I love!) Or Vox. It depends also on used speaker - in my case a VHT 1x12 with Celestion GH30 hp. There 's really close to it Deluxe with a little more mids though.
As we leave the overdrive crunches though progressive starting from almost clear to go to good distortion which I find quite 70s. DO +, I think we reached the limits of the beast - in my case, which becomes too aggressive (something not very pleasant in the treble). It's a shame, because we would not be far away from something great with a tone control for specific OD channel or a dedicated switch for voicing.

A word also about the direct console output: it is simply the best DI I know - after the late SansAmp, 1st name.

I have tried a lot of amps and heads, some cited above in the tube amp in Paris (a special mention for their kindness, patience and listening to their recommendations pertnence). I also had a Fender Blues Junior II that I have deeply modified (Bill M Mods Audio) never get to find my sound clear reference (Blues Deluxe) in more portable size.
I finally have an excellent compromise with this very versatile little head (except probably metal) with clean sounds are dirt to fall either with a Telecaster or a Les Paul.
See the source
Did you find this review helpful?yesno
Cookies help us improve performance, enhance user experience and deliver our services. By using our services, you agree to our use of cookies. Find out more.