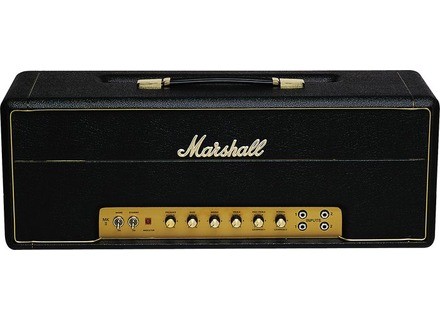 View other reviews for this product:
What can I say that hasn't already been said about Marshall amplification. Marshall has been the leader in high gain amplification since the 60s. The Marshall plexi came out around 1967 and has to this day been one of the most heavily used high gain amplifiers for touring musicians and recording musicians. This amp is a take on the 1967 to 1969 plexi amplifiers. They look exactly like the old ones who was some new modern features.

One of my very first Marshall amplifiers was a Marshall plexi from the early 70s. That one was an amplifier that I didn't gig with very much because of the old vintage value to it. Now that Marshall is reissuing plexi amplifiers, these are much more commonly used onstage now because of their enduring lasting ability.

If you like the tone of the old original amps then you will like these new reissue amplifiers. The tone remains the same with these new amplifiers but you also get an effects loop. This gives you the tone of the old days the new modern technology all-in-one classic looking amplifier. I like the sound of thai amp with Gibson Les Paul. There is something that magically happens with the Gibson Les Paul and

Marshall plexi that has given so much inspiration to musicians around the world. If you want to get the tone from Van Halen, you would use this amp with a super Strat guitar. Using attenuation with this amp and that's super Strat and you will be rocking out to Panama all day long.


These amps come in at new price if around $2350. That is a pretty expensive amp. If you're looking for that classic Marshall plexi sound and don't want to spend $4 or $5000 to get the originals and then this is the best option you have available on today's market. $2300 is an expensive price for single channel amplifier but if you're looking for that classic Marshall plexi tone than this is the price to your going to have to pay to achieve that type of tone.
Did you find this review helpful?yesno
Cookies help us improve performance, enhance user experience and deliver our services. By using our services, you agree to our use of cookies. Find out more.