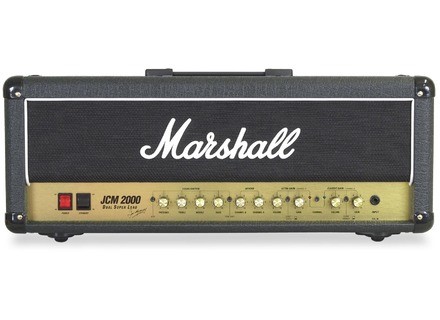 View other reviews for this product:
The Marshall JCM2000 DSL50 is a Marshall amp head with that trademark Marshall sound. DSL stands for "Dual Super Lead" which makes it the two channel model. (Marshall also put out a TSL with three channels in this same JCM2000 series of amps) The 50 in DSL50 means that this is the 50 watt version. Marshall also put out a 100 watt version named the DSL100 for people who need extra volume and clean headroom. The DSL50 has two footswitchable channels, and each channel has two separate modes (which are not footswitchable). Channel one, also known as the Classic channel, offers a clean and a crunch mode while channel two offers a Lead 1 and a Lead 2 mode. This amp has 4 12ax7 preamp tubes and two EL34's in the power section. The spring reverb on the amp has dual knobs for setting different amounts of reverb on each channel and is footswitchable. The EQ section is shared between the channels. The amp has two tone circuits that are available via buttons on the front panel. One is labeled "Tone shift" which basically is a mid-cut EQ setting and the other is labeled "Deep" and is a bass boost. A standby switch is also included to save tube life. The back panel of the amp allows access to the series effects loop with a loop level pad button, jacks for the channel footswitch and reverb on/off footswitch, and three loudspeaker outputs that allow you to use 4, 8, and 16 ohm cabinets.

This amp is everything I need in an amp and nothing more. I don't need 100 different presets available at the push of a button. What I do need is an amp that has a few QUALITY sounds, and this amp has that. It is very easy to set up a great sound with little tweaking. The shared EQ is both a blessing and a curse depending on the user. I'm not one to want a drastically different EQ setting on different channels, so I usually set my EQ fairly even on amps that have different EQ sections for the clean and dirty channels. The shared EQ does not bother me one bit, but I can see how some users may want to tweak each channel a little bit and it may be lacking for them in that department. The different reverb levels on each channel is really great, but a "spillover" feature allowing the reverb to trail when channels are switched would be nice, even if it meant going to a digital reverb instead of the spring reverb. It's a pretty straight forward amp to set up and is easy to get great tones out of, so the included manual (also available on the Marshall website) was not used.

What does a DSL50 sound like? Answer: A Marshall. You've heard these tones on countless recordings and this amp is widely used as a touring amp and as a standard backline amp at various venues. Two great channels, with the dirty channel being the better of the two. Clean sounds are still very usable, but are a little thin when compared to Fender style amps. Still it's one of the best clean sounds out of a Marshall I've heard. The clean sounds are very Hendrix sounding, even more so with single coils. But who buys a Marshall just for the clean tones? The dirty side of the amp is obviously where this amp shines. The Crunch sounds on channel one are very open sounding and nail that AC/DC heavy, but not overly saturated sound. Channel two on my amp always stays on Lead one mode, and it has the hot-rodded Marshall tones we've all come to love. Channel two, Lead Two may be useful to some, but I find it to be overly saturated and downright fizzy sounding. Different tubes or speakers may change that, but this channel just sounds too compressed and fuzzy in a bad way for me. The tone shift is useless for me as well, but the deep button is nice for use with open back cabinets that lack bottom end. Single coils into the DSL50 sound great for clean to slightly overdriven and up to distorted rock tones, but with a dual humbucker guitar is where this amp shines.

This is my number one amp for a reason. It sounds great on both footswitchable clean and distorted channels and allows me to cover a lot of ground with only a few effects in the series effects loop. While there are a few options I find useless (Lead Two mode and the Tone Shift button) this amp has all the options I can't do without and not a lot of wasted gimmicks in the signal path to mess up the tone of the amp. I've tried several models of amps before landing on this one for my gigging amp and this is the model that just makes sense. Great tone and reliability, with the look and sound of a true Marshall amp. If it were lost or stolen I'd be on the internet ASAP trying to snag a deal on another one. I don't know why Marshall discontinued them. Truly a great amp and I give it two thumbs up!
Did you find this review helpful?yesno
Cookies help us improve performance, enhance user experience and deliver our services. By using our services, you agree to our use of cookies. Find out more.