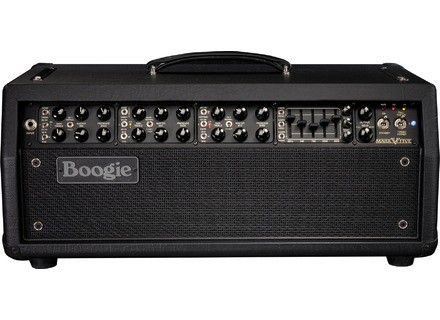 Buy this productView price information >
View other reviews for this product:
This amp is a beast. I would say that the Road King is the most versatile amp in the Mesa Boogie line up this amp is right up there with that one. This amp has more features and control knobs on it that make a airplane control room look small. It looks like the amp could take flight if give wings. Well, I have had this amp around many situations and I have to say it has some soaring features and tones that make it a lot of fun playing with.

It is basically three channels from the earl Mark up to the modern Mark series amps. The best part of this amp in my opinion which is on all Mesa's which makes me love Mesa is the self biasing features it has. Not having to pay some amp tech to pull your amp out of the chassis and spending the money is a plus.

I was playing a Les Paul through this amp and that combo had some huge balls to it. It was chest thumping tonal goodness. It sat very nicely in a band situation in different speakers settings as well. It thought it sounded best with a Custom Audio Amplifiers 4x12 that had some Celestion Greenback speakers in it. The highs were a little too piercing and so I think some Weber 1265's or some Splawn Small Block speakers that are rated 65 watts would do the trick rather than having the 25 watts that we used. Another great option I had was the Vintage 30 Celestion speakers. These had a more warmer tone but lacked in the midrange. A mix of the two probably would be optimum, but wants to carry around two 4x12 Mesa Boogie cabs. Hauling one of those things around is tough enough.

This is a workhorse amp. It will be ready to rock with you night in and night out. Although, I have one friend who has gone through a couple of these amps because they failed on him. Luckily he had the Mesa warranty and wasn't out of pocket at all, just out of an amp for a while. Mesa is good at customer service as well. You can call there anytime during the work hours and speak to someone who is helpful. They are big company with small company standards and people skills. I highly recommend them to anyone.
Did you find this review helpful?yesno
Cookies help us improve performance, enhance user experience and deliver our services. By using our services, you agree to our use of cookies. Find out more.