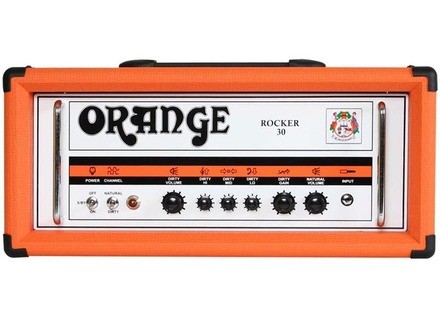 View other reviews for this product:
For specifications, see below.
I added: construction absolutely perfect and flawless finish.
-2 For the lack of reverb and loop, though, as personal, it does not bother me.
I negotiated with the footswitch gratos buying the tête.C is true that it is a bit shabby from Orange do not provide it automatically.

Configuration very simple, just that it's happiness.
We get the sound at all.
I describe below.

CABINET: ORANGE PPC 212
GUITARS: Fender Telecaster Baja, Gibson Nighthawk.
- The clear channel: called "natural", and equalizer cause.Pas which distorts the signal, just a simple volume.Avec the sound is warm, punchy, perfectly balanced fréquences.C is less crystalline than Fender, less loaded with bass, rounder, may be less rewarding to play alone in his corner, but much better in a mix.
He faithfully transcribed the sound of guitars and microphones, which feels much better all nuances.Il does nothing to forgive a bad stove, but magnifies the good.
With TV, the channel starts cruncher at 3 / 4 of volume.C is already very strong!
Because of its design, this channel agrees very well all types of pedals disto.On even say it is for ça.Là also the grain of the pedal is fully respected.
I tested among others with a Blackstar HT Dual: great!
- The channel distortion: called "dirty", it goes from light (yes!) To hard seventies.
We find all the features of its Orange, between Marshall and Vox ... It's hot, hot even, dynamic, somewhat compressed, with that inimitable grain that makes the magic of "British sound". Less aggressive, less fit inside the Tiny Terror, I semble.L equalization is effective, allowing her to sculpt her mesure.Même on notice that the clean channel: the receiver is fully compliant with the guitar and not his n'uniformise .. J 'get it very different results depending on the used microphones or guitars.
That fans are assured of the time: provided you use an analog delay, stay wise on the rate of time and number of repetitions and not to force the volume of the effect, so good.
In short, its level in the category of vintage, it's flawless.

Truly a superb ampli.Il obviously need to associate a cabinet that is not the "weak link" and a guitar to fully respects hauteur.Il guitar and guitar and does not, but then not at all easy in the bluff .
Just like a Telecaster, it is tamed, is "working" and will delight those who think the sound is also a matter of technique and fingers.
While it is not cheap, but gives much.
I did not have all the amps in the world (8080.8100 H Marshall, JCM900, JCM2000, MusicMan RP112, Tiny Terror), but it's the best I've ever had.
And associated with the baffle, which look!
See the source
Did you find this review helpful?yesno
Cookies help us improve performance, enhance user experience and deliver our services. By using our services, you agree to our use of cookies. Find out more.