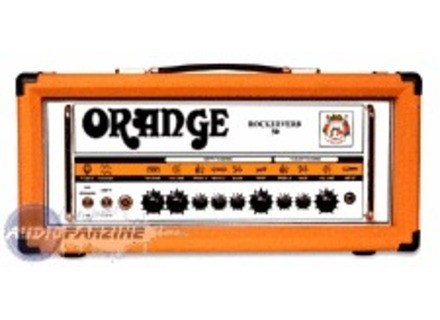 View other reviews for this product:
This is a 2-channel tube amp head in the British tradition, as Orange is known to make. It has one 1/4" input as well as a speaker cable output and an effects loop. In my opinion Orange Amps sound best with Orange cabinets but I'd say overall that you could also use a Marshall cabinet too. There are 50 watts in this amp, which doesn't sound like much but trust me, it's plenty. There are no effects other than reverb which is on both channels. There are volume and EQ controls for both channels, though the dirty channel has a gain knob as well.

Getting a good sound out of this is easy assuming you like the sound of this amp. It's different from most sounds but it has a phenomenal tone. The controls are so simple that dialing in a good sound is pretty basic. I like the EQs because they don't alter the tone too drastically, they must be designed in order to complement, rather than distract from, the sound of the amplifier. In fact, with no EQ at all the amp still sounds great. But anyway, the reverb is also really easy to use. There isn't a master level which is strange but it's nothing I can't get used to.

This amp sounds absolutely phenomenal with my Tele, my Jazzmaster, and a Les Paul. Basically it's great for rocking out, and not in the metal sense. The clean channel is ok, it's not anywhere near as good as a Vox AC30 or a Fender Twin, it's really not anywhere in the ballpark of either of those companies' greatest amps, but I will say that it has a nice character of its own. It's not particularly bright enough for me usually but sometimes it works. The dirty channel, however, is phenomenal. I have a hard time getting dirty tones that are as good as this with almost any other amp. Pedals and Fender Twins just aren't the same. It's got a bright, punchy, singing tone that works great with most rock music, especially the stuff that's not TOO heavy, though with some nasty modern humbuckers like in an ESP you can really crunch this thing to death. And let's not forget the stellar spring reverb which rivals Fender at it's best! It's basically a great addition to the already stellar Orange lineup. Granted, it's older, but it's new to me.

I really liked the dirty channel on this amp. The clean channel was good but not as amazing as the dirty. Overall I'd say if you'd like a pristine, British-style distorted guitar amp, then this is probably your best bet overall. It's certainly expensive but it's pretty reasonable considering the others in its price range from Marshall and Fender and other competitors. The sound is great and it's probably going to work for any rock player who isn't trying to get really really heavy (though again, that is possible). Highly recommended.
Did you find this review helpful?yesno
Cookies help us improve performance, enhance user experience and deliver our services. By using our services, you agree to our use of cookies. Find out more.