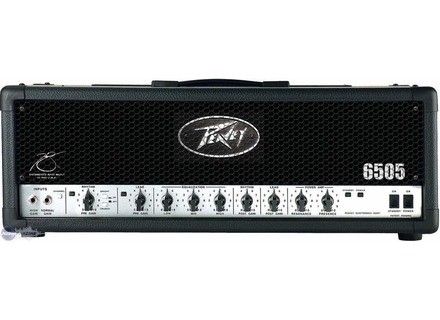 Buy this productView price information >
View other reviews for this product:
The Peavey 6505 is the updated version of the famous Peavey 5150 as popularized by it's signature endorsee Edward Van Halen. The original 5150 was noted as a great rock amp, but eventually was recognized as a killer amp for metal music. Eventually Peavey took things one step further and released the updated 5150 II which had separate EQ for the channels. When Ed left Peavey in 2004 he took the 5150 designation with him... and so in 2005 Peavey renamed the 5150 the 6505. The 6505 is a 120 watt firebreather of an amp, featuring two channels.

This amp is a bit more simple than the 6505+. The two channels feature only pre and post gain controls (essentially reworked phrases for gain and volume). The EQ on this amp is shared between the channels (bass, middle, treble, as well as resonance and presence). On the back it has two speaker jacks, a switch to select between 4ohm, 8ohm and 16ohm impedence, a ground switch and send/return jacks for the effects loop.

Tube wise it features five (as opposed to six on the 6505+) 12AX7 preamp tubes and four 6L6GC power amp tubes to unleash the fire within.

The Peavey 6505 is an extremely easy amp to set up. It's not QUITE as easy as the 6505+ because you're dealing with a shared EQ for both channels, but it's still not terribly arduous. Peavey amps in general don't require much tweaking in general to sound great. The two channels are set up identically, so there's no new interfaces to learn and there's not really a learning curve with the EQ or gain structures like say a Mesa Dual Rectifier. Something to note about these amps... they are LOUD. When I had mine, I could barely dial the control to one without it being too loud for the room. In a band setting I found that two or three on the volume would overpower the drums... as a result I didn't keep it very long. Essentially, if you want one of these amps, be prepared to deal with the volume.

I primarily used this amp with a Les Paul, a PRS and a few other various humbucker loaded guitars in a studio setting. The two channels are meant to be a clean and lead, however the clean channel really doesn't do great cleans. The clean channel is more useful as a crunch channel, especially when boosted with a good overdrive. I tried to get decent cleans out of this amp, but what I was greeted with was fairly flat and unremarkable. I had more fun turning the gain up full bore and just using channel one as a crunch channel. Channel two is a great high gain lead sound for any modern player. Despite the fact that I never tried it with any delay/reverb effects, I noted that on its own, the amp had more than enough sustain (via saturation) to play great lead passages as well as quite a few different types of hard rock and metal riffs. It doesn't really do the eighties thing all that well... which is somewhat surprising considering it's basically the EVH signature amplifier (though I've noticed that EVH has steadily gone for a more modern tone over time). The thing about this amp compared to the 6505+ is that the shared EQ makes things a fair bit more limiting as far as balancing the channels tonally. Fortunately Peavey's EQ structure isn't too bad as far as the learning curve and it works well enough that I don't feel the need to complain about it TOO much.

All in all, the Peavey 6505 is a great sounding amplifier head for anyone who wants a loud, gain heavy, loud, really saturated, loud tone. They are about $1,000 new and can be had for a fair bit less than that used, which is a killer deal for a USA made head. Peavey gear is quite reliable and I'd have no qualms using the 6505 for more rigorous applications. I partly wish that the "clean channel" was cleaner and sounded a little clearer, but used as a crunch channel it's fine. The lead channel is high gain, but it's still controllable and the excess saturation can be used to your advantage if you allow it to. The shared EQ is a bit of a frustration compared to the 6505+ and ultimately I'd prefer to spend the little bit extra to have the separate EQs at my disposal. Still, it's definitely worth looking into if you want a great metal amp for not a whole lot of money.
Did you find this review helpful?yesno
Cookies help us improve performance, enhance user experience and deliver our services. By using our services, you agree to our use of cookies. Find out more.