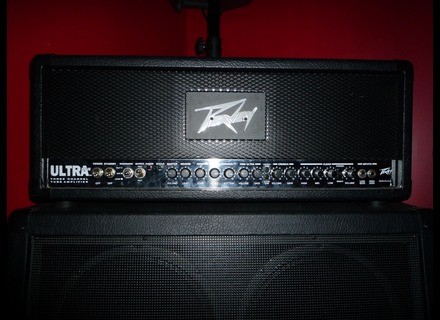 It&#39;s a fairly old-school head: one is not lost in the settings ... Gain, Volume, 3 band eq, master ... it goes fast (and it is quickly turn). Only the resonance switch may seem enigmatic and it is basically an adjustable bass boost for (or low-cut adjustable).
The volume of each channel is handy.
The half power switch can save 2 of 4 power tubes when you play a low volume, convenient ...
At full power is the Feast of the slip so we can push this amp (I have never exceeded 6 and was in a room of 200m ² with sound not ...) So those who feared the brand peavey can reassure c &#39;is a tube amp ....
As against red card (houuuu! hooouuu!) For the footswitch ridiculously small (3 cm in 15 switches: record to beat) and poorly thought lead / crunch left clean on / off and reverb to right center, IT&#39;S IN CONCERT A CALVARY !!!!! Actually seen the size of the switch happens to press the clean has priority over other canaux.Résultat: CLUNG! CLUNG! when we wanted to spend crunch lead.
In addition, for 6000 balls we head right to expect anything but a piece of plastoc perrave.
So as this retail sanction me ruined pieces together like I send the big solo, not you got a clean perrave (and here, the public shows you the finger and does not care about your face ... it&#39;s been part of my therapy to write this opinion ...)
One can also regret the absence of level control loop effect and the fact that it is not switchable.
More (décidément!) peavey logo in lights and facade changes color depending on the channel: a beautiful bright green for clean, a very trendy for the orange crunch and finally a red blood DEATH for lead . It is certain that some players like to, but I have a Christmas tree peavey plu.Enfin ca me too ...
Note severe is mainly due to a footswitch sad, ashamed ... (I was clear enough?) But the head remains pleasant to use ...
I would add that it is rock solid and heavy as an anvil ..
It goes without saying that in the peavey manual is succinct as NUL.

Here I play the head of métaaaaaalllll and frankly a good distortion (crunch and lead), although incisive while keeping the color "lamps" my faith strong agréable.Le gain can be pushed too far (more than a jcm 900) : lovers apprécieront.D Moreover a high volume I recommend using the crunch has pushed Burns made a gain that interesting. For lack of clean against the mouth and is quite banal so blah.
The EQ is very effective and large nag was surprised that I quickly cut up the bass and midrange (God knows it&#39;s hard to get a metal switch mediums !!!). The "resonance" is used with a parcimonie.Il must therefore spend time in groups but you can sculpt his sound well (!) and this is one of the strengths of this amp (especially when there are two scratch in the group).
The reverb sounds good (Because Accutronics) and is quite usable.
Also noteworthy is the relative transparency of the head that really respect the sound and personality of the guitar, so scratch the shit = rotten (Jim Harley enthusiasts are disappointed at the back of the room, I see you well). For cons with a Les Paul (same studio) it sounds really GOOD (You amaze me! And with a PRS, asshole?). I tried several guitars on it even though my guitar is a jackson ps4 main bofbof (to be polite ) and it feels really.

Here, I use the head more or less intensively for 4 years and I&#39;m pretty satisfait.Je have preferred a more polyvalente.Je since 5150 have had no problems (if n &#39; is the inevitable change of lamp).
I do not find it particularly expensive for the proposed but do not expect to have the biggest guitar sound in the world because it has a more neutral than the grain or other marshall mesa, a personality that marks less marked nommées.C above is therefore knowingly choose the head must be knowing, for against, the instrument will be dominant in the personality of her (uh, I do not know if chuis clear here!).
If you play several different styles, the versatility offered is attractive.
So it&#39;s a very nice amp head and 7 seems to be a note that&#39;s not enough juste.Et peavey guitar rotten gentlemen !!!!!
See the source
Did you find this review helpful?yesno
Cookies help us improve performance, enhance user experience and deliver our services. By using our services, you agree to our use of cookies. Find out more.