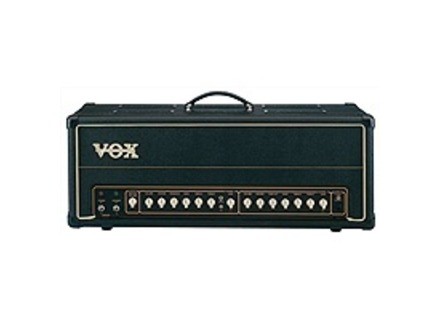 « This amp beats a Orange , Marshall , Fender, and Mesa Boogie  »

Value For Money : Excellent Audience: Anyone
View other reviews for this product:
This Vox AC100CPH was my first real amp in 10 years since 2004 when i stopped . Then I started playing in a band again in 2014 when i bought the Vox used for !
$300 . Been buying other amps trying to find a better tone , like we all do lol . So I have bought a Marshall JCM900SLX that was a two channel beast , then a Fender Supersonic 60 watt head , then a Orange Rockerverb 50 mk2 head , and last but not least a Mesa Boogie Dual Rectifier RevG , and after trying all these heads , I keep coming back to my Vox AC100CPH . It just works for me . I use a OCD pedal out front , and for leads I use a Boss GE-7 equalizer in the effects loop for boost . This amp is JCM800 in spades with the OCD . I dont have the fat boost on and am always in the high gain channel i think it's channel 1 , but believe me with a Les Paul it's classic rock heaven with the gain set low , and the OCD off . Then to take it into sweet Jcm800 territory with the OCD . Then using the EQ in the loop it's a perfect boost/slash tone shaped lead that pops out with just a slight bump in the middle with everything else on 0 . It is so effective you will never use a clean boost out front ever again . I get compliments from other players all the time . Try these methods with this amp and it will be the best rock/metal/punk amp you could ever dream of . Overtones for days . I crank the master volume and use the channel volume for actual volume . I find that is the best sound . Then I crank everything on 10 except the bass , and the gain , and the channel volume . Channel volume is on 2 with master cranked , bass is on 4 , and gain is on about 6 or 7 . But all other dials are on 10 . Don't pass this amp up if you play rock punk or metal . Soo good and built like a tank . Been playing it for over 5 years and it hasn't needed any tubes or anything . Best amp ever