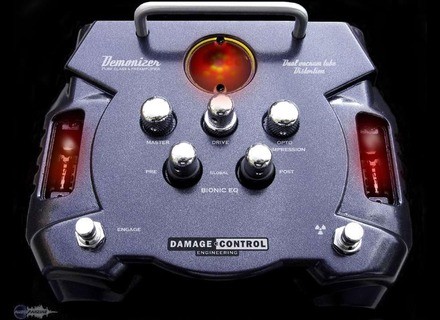 Well, on paper, it&#39;s something enticing: big tube distortion pedal that has a killer look, with a terrible feature that made me want to buy it, the function ID.
In short, a distortion pedal, a big fat tube simulator to connect directly to a mixing desk / PA.

Super interesting (on paper, yet ...) for big metalheads disappointed Pod (or who can not use that kind of gas plants, like me) in Music, or to avoid carrying around 80 kg of in gear again.

Super simple to use, turn the knob is basic.

In computer music / DI:
Big hics immediately: no effects loop, mute function and if we use the ID instead of a bypass. And that single channel.

No loop, so in use as well as one on a console, the effects must pass after the HP emulation or before demonize. B&#39;en the chorus / EQ / etc. It sounds much worse.

No bypass, but if you disable the mute pedal sucks, especially since it is single channel. So we can, depending DI, moving from a saturated or a big crunch to a clear (even the basic sound of the guitar what!). So if you play a piece that requires a small clean and saturated solo, you can not do it live if you have connected the demonize the group&#39;s sound. It&#39;s either clean or saturated. Is zero.

B&#39;en simple as any. The best course is to put it directly between the guitar and Poweramp, but there b&#39;en c&#39;st single channel, so saturated sound of the pedal, and clean through the bypass ... not great. And one cares effects between this pedal and Poweramp.
By connecting it between the guitar and the input of an amp, not bad, and it serves primarily to keep a clean through the clean channel of the amp. But it sounds much less than directly attacking the Poweramp.

Another disappointment ...
Yep, in DI, the clean sound is not a reference type, narrow, rough, hair flapping.

By pushing a little drive, you end up with a crunch not great either: always rough and rocky, far from the crunch that I can have a Powerball, and light years of a Soldano Supercharger, which is a nice reference crunch in creamy and full of harmonics and sustain. Indeed, the dire demonize sustain without pushing up the compressor. There&#39;s no life in the crunch. Just as in clean.

By pushing the gain on tap, a saturated fairly feeble. Again, not a grain terrible, far from Engl, Mesa and Co. The dynamic is totally zero, a very frustrating feeling by attacking the strings.
There, for the great big metal must then out the big guns: fully gain, compressor base, and enable the +20 dB boost.
Is only beginning to end up with a good feel on the strings, sustain a creep.
Mouaif, all to knock ... and with a shovel EMG, I dare not imagine with microphones that spit less than 350mV

In short, I can do at least as well with a VAMP2 coupled with a GST Art for easily half the price in Mao. And in addition, VAMP2 has different grains, where demonize has only one, and it is not transcendent.
A Pod as the bursts (and yet I do not like pods), and for the same price, a Pod XT Live has tons of more effects, more sonic possibilities, and a simulation of HP at least as good.

Aaaah yeah, when you slice matter gain, boost compressor and, inevitably, it blows ...

Really disappointed. Like what, looks killer, a killer name, and two 12AX7 that shine with a thousand colors, it&#39;s not all.

Well, b&#39;en flipflaps return to sender after 15 days of testing at home.
There&#39;s much better for the price, even cheaper: Pod XT Live, VAMP2 Art + GST ​​secondhand Engl 530 with a small DI box, ADA MP1 with DI, Sansamp, etc..
In DI: one channel use (damn mute m * rde!), A grain not transcendent, not avalanche gain without any pushing, breath ...
In distortion pedal, b&#39;en to 450 euros a piece, I see no interest: so sell his amp and add the 450 euros in a small light amp that goes well, a preamp or secondhand lamps .. .

Shame, in the spirit, a tool Mao tube, easy to use, it was a good idea. But this is totally missed.

I forgot: tests with a Gibson Les Paul Classic with EMG, a half stack Engl Powerball. For Mao, boarf, a Yamaha mixer, my old Audigy 2, etc..
Amazing that my Les Paul lacked sustain this bagpipe ...

And thank you for your trust, Golem1!
See the source
Did you find this review helpful?yesno
Cookies help us improve performance, enhance user experience and deliver our services. By using our services, you agree to our use of cookies. Find out more.