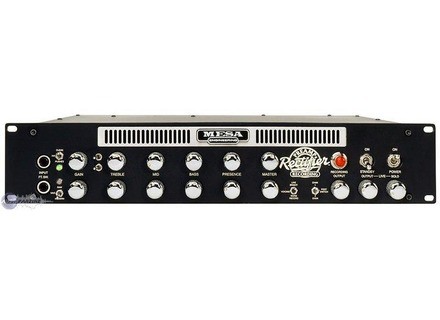 View other reviews for this product:
When I think of Mesa Boogie I think of pro built high quality amps and cabinets. Mesa has built a solid reputation for building solid road worthy and abuse taking equipment. Many professionals have played and toured with Mesa over the years.

The biggest and one of the first major bands was Metallica. They used Mark llC+ quite extensively throughout the years. Now I think they have moved toward Diezels, but anyway they still record with them to this day.

Another favorite band of mine that used them was Stryper when they first stared out. They used Mark lll Coliseums which are almost impossible to come by anymore.

Finally, a band that just released a new album is Foo Fighters which uses the Rectifiers to get there touring and recording sound. You generally won't see anything else on stage with them that isn't a Mesa. So there are some great bands who use this top notch brand.

This unit was really designed to be used in the studio format. You can definitely use it in a live situation with a Mesa power amp but I think the whole point is using in the studio directly into a mixing console. Because basically at the same price you can buy a Dual Rectifier head that comes with a power amp.

Mesa are just as basic as eating pie to figure out...unless its a Mark series. However, we are talking about the Rectos and they are simple. This preamp comes with two channels and six modes that take you from three for the clean and three for the high gain channel. No need for a manual since the controls are pretty self explanatory.

If you have ever played a Dual Rectifier then this is exactly the same. You have a solid sounding clean channel and massive high gain channel. Me... I think both channels are fantastic but that isn't why we buy Mesa Boogies. Crank up the gain on the Modern switch and man does your chest hurt from the low end thump. These tones are so massive and beefy that nothing really compares to a Recto sound. Slap a humbucker style guitar in front of it and you will get a huge wall of sound slamming the rest of your band.

Mesa Boogie is a fine amp company that still finds ways in new products to capture a whole new crowd of followers. I would recommend this mp to anyone who needs Recto amp and needs it for studio use. At new they come in at a round $1400. Great bang for the buck and a little less then the Triaxis and many other preamps.
Did you find this review helpful?yesno
Cookies help us improve performance, enhance user experience and deliver our services. By using our services, you agree to our use of cookies. Find out more.