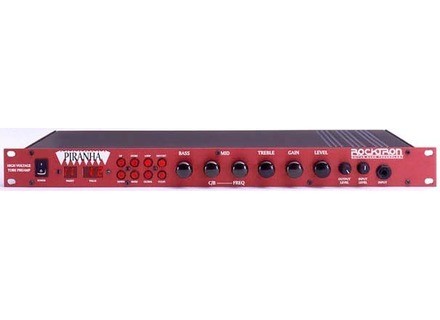 View other reviews for this product:
Pramp lamps (2), 3 channels (one clear, one disto classic, disto one modern), HUSH, MIDI!
For the rest, see Opinion of the previous ones or manual Rocktron site.
Trs connector complte.
BUT it is missing the real and phantom power supply names for the presets!

Config simple: all the knobs are rglage facade, there is no sub menu .. It's true Plug n Play without making head, suddenly, it focuses entirely on the sound.
The manual is clear and simple, Rocktron is nothing wrong.

Otherwise, with respect to the obtension a good sound, easily obtained basic sounds like Metal, Rock, Blues, Clean "clean". The qualisation is active and mdium paramtriques which provides sound trs trs Varis easily.
So easy to use.
For cons, I do not know if it's the grain of the particular amp (or lack of habit of using the active EQ), but it's not empty to find "tons of sounds DIFFERENT "usable. I think, in the words of the remaining users, need to spend time there, but I thought that a prampli so "simple" could be so minute rgler: mean really prev noticeable differences in sound when turning the knobs up a notch.
The HUSH operates the hair! I was the dj Intellifex, but the it seems to work even more effectively!

The grain is very special and not everyone will like aps. I usually play on the Peavey and it compltement Different. (But hey, it also has that I bought it!)
Standard style is used for everything: pop, blues, rock, metal, ...

The clean sounds are beautiful trs, "peace" or crystalline depending on rglages. on the other hand, if you have high output pickups (EMG 81, 85 or otherwise), prvoyez to gain a (0-70) or lower the level of (in the Input knob faade).
The distortion channel "vintage" is fun for even the Hard Rock FM. The more, the sound is peace and quite warm.
The distortion channel sends a little more modern gain levels and especially the grain appears more Submitted on other channels. I thought there would be more gain available but only when the metal even for fairly straight forward (unless the same when Peavey!)

Compared to the Peavey (DSOL is my only REFERENCE!) Is more peace, more "fat", a bit less prcis and when I think even less gain (on my Tubefex I feel to reach the piranha max gain when I'm half the knob!).

But even when the grain is very nice, trs typ. It is his strong point.

I did that for three days so I'll post one when I complment matriserai more bte!

I am being tested with it. The grain is cool but I find the need to test before buying. It is trs polvalent priori and easy to use. Prvoyez even when long hours to find a palette of sounds Varis and best use of the EQ parameter.
Notice the effects loop: I plug my Inteelifex in, there's no major problem except a priori its bizar with 10ms time limit but confirm. (That I was put at 8 and 9 no rating)

Added: After a few weeks of use, I conquered! The sound is really good even if it takes the Entran and ear for rgler. Since then I have a test Recto Recording (with same cabinet and HP) and I find that saturated fats are also the other one! on the other hand, lightweight advantage on the front for clean sounds (but especially the switches to the widget). Finally, for the price, I prfre the Piranha!
See the source
Did you find this review helpful?yesno
Cookies help us improve performance, enhance user experience and deliver our services. By using our services, you agree to our use of cookies. Find out more.