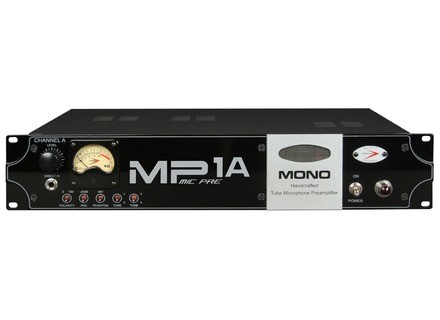 View other reviews for this product:
The MP-1A is a pretty standard one channel tube microphone amplifier. It has all the features you need including -20dB pad switch and Polarity Switch. The MP-1A is well built and only weighs less than 20 pounds. It does require 100 VAC power though. The gain range on the MP-1A is 60DB with an input impedance of 100K OHM. The unit can be racked and it will only take up one space. The cost of this amp is well below what it should be, other amps that are of this quality cost about 30 percent more than the MP-1A.

A new feature that the MP-1A has is the XLR ¼ input true UV meter along with the phase reverse switches. Set up is easy if you have already worked with similar modules before, but if not it still is easy you might have to glance at the manual to get an understanding of what everything does.

The price of the MP-1A is by far its best selling point, coming in at a lower price than its competitors makes it a must have. It could be hard to get your hands on one though because I am not sure if you can still buy one new. We are very happy to have used the MP-1a, we used it for quit some time and it went out on us, probably because it was already a semi used unit and we really wore it out on top of that. It did cost too much to fix so we just got rid of it. You wont get a much better sound quality for the price of the MP-1A