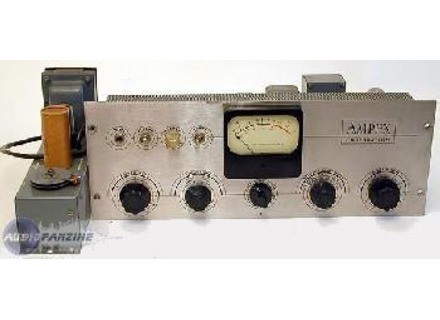 View other reviews for this product:
The Ampex 351 is a single channel tube based preamplifier. The studio that I used this in had four of them, which was really awesome as it allowed you to have two stereo pairs of use with the 351 if you wanted to. We did indeed have all four of them going at a time for a drum session. I'm unsure of the connections that it has since they were already racked in the studio that I was using them in, but it does have a 1/4" headphone jack in the front of it. The 351 is made up of analog components and real tubes, and will take up a hearty four spaces in a traditional sized rack casing.

Using the Ampex 351 isn't too difficult, but it does have more parameters than you would expect from a vintage piece of gear like this one. The main knobs include parameters for record and playback level, as well as for equalization, and choosing your metering and your input source. So while there isn't too much to know with the 351, it does have some extra parameters not often found on today's preamplifiers that you will need to get used to. I don't know anything about the manual as I never had a need for one and is one that would definitely be hard to find anyway.

The sound of the Ampex 351 is extremely thick and warm, making it great for applications of all types. It definitely has a 'vintage' sound to it, producing that certain level of thickness and grittiness all in one. I've used the 351s for recording both drums (snare drum and kick drum) as well as for both acoustic and electric guitar. While I didn't like the sound as much for acoustic guitar, for electric it sounded beautiful and the same goes for the drums. In general I think the 351s are best for heavy sorts of sounds rather than for bright acoustic instruments, but I'm sure that other users have found uses for it beyond what I've done.

I wouldn't really know where to start if I were looking to purchase an Ampex 351, as they are pretty hard to come by. I've been lucky enough to do some work in a studio that has four of them, but I haven't really seen them anywhere else. If you come across an Ampex 351 I would definitely recommend not hesitating and using it to see what you can do with it as it is definitely a worthwhile experience for engineers who love vintage tube gear...
Did you find this review helpful?yesno