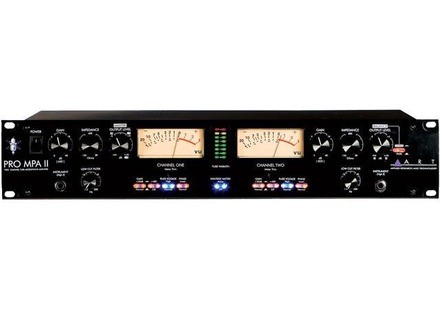 View other reviews for this product:
Let me start by saying that this unit has been more than just a simple 2-channel tube microphone preamp. It is a tone monster! With selectable impedance, 3 gain stages, 2 choices of High and Normal Plate Voltage and a really useful and transparent Low Cut Filter, this unit will perform with any kind of source and provide you with a kaleidoscope of sounds. On top of that, you have the option of running the 2 channels with only one set of knobs through its Stereo mode, for Room micing applications or even running stems through it! It also processes your Mid-Side micing setups for that really wide stereo capture. And it just sounds better than doing it ITB. There is somehow more coherence between the center and the side channel, and you can really push the side more for that HUGE drum sound.

The construction is top notch, and as a testament it has stepped knobs. I’ve owned this unit for almost 5 years now, I’ve travelled with, and it just feels like the first day.

Other features include Phase Invert and +48v switch, a 2 set of High-Z Instrument inputs, as well as your standard XLR inputs and outputs, and a set of balanced TRS outputs. Oh and a word of caution, there's a tiny little button on the back to switch between Pro (+4 dBv) and Consumer level (-10 dBu). It tripped me off the first time because I had it disengaged and was getting minimal signal level coming into my interface. So, to most users, just leave it pressed.

As I said before, this preamp is versatile. Through its different gain stages you can really shape your sound:

1. Gain: controls your signal going into the tube amplification stage.
2. +20dB: more often than not, I have it engaged. It pushes the signal going into the valves to really color your sound. By means of the “Tube Warmth” display, you can easily measure the input drive of the tubes. I’m generally driving it when I’m for instance, recording a soft passage of a vocal take. When I go into the chorus of the song I back it off to give it a little more room, but even if you go into the red, it’ll give you a really nice distortion. I recorded a Bass Guitar for a reggae song and it sounded great by having it on red almost all the time.
3. Output Level: gives your final level control going into whatever you’re recording with. There’s always plenty of headroom in this unit and this is where the VU meter come in handy. But even so, it’s not that important, as with anything in the analog world, it is more about the tone.

The Impedance knob has a range that will work with most condenser and dynamic microphones. It’s really tough to describe what it does to the sound, but sometimes I feel it like it gives you a more focused mid-range on one end, and on the other a more rounded, balanced response.

Lastly but not least, is the Plate Voltage switch. It will give you shimmering highs that for female vocals works wonders. It feels like an aural exciter, but works only on the upper end of the frequency response. You may feel that you can achieve the same effect with EQ’ing but trust me you won’t. It is about commitment with this one.

Even when you pair this amp with a cheap mic, it’ll give that warmth and that extra percent that is hard to put a finger on. Really I have nothing to say but good things about it. Obviously you have to consider that this is a tube preamp, so it will color your sound substantially. Now, one thing that really blew me away was when I ran a full mix through it. For lack of a better word, the sound just became real. And when pushed, it rounded the transients kind of like the effect of a tape machine.

It may seem complicated to work with, but believe me it is not. Plug in your favorite mic and there’s no way you’re going to make it sound bad going through this preamp. You will have instead, colors and colors to choose from.

Cons:
- I really had to look into for this one but you may have to calibrate your VU meter needle from time to time. But this could be even considered normal.