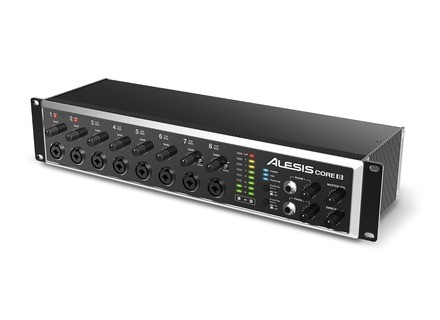 Core 8, USB audio interface from Alesis in the Core series.

Alesis will introduce today at the NAMM Show 2014 the new Core family of USB audio interfaces, with three models.

The Alesis Core 1 is the most compact and affordable in the range, with only one input and two outputs, and a 48kHz sample rate max. It will have a US street price of $49.99.

The Core 2 is designed for home studio or travelling musicians who need to record one or two instruments to their desktop or laptop computer. It features two XLR/TRS combos and two 96kHz outputs. Phantom power, 2 USB ports, as well as MIDI In and Out and LED meters are also present on this ERP compliant model which price is announced at $149.99.

Last, producers and musicians who need multitrack capacities can look at the Core 8, an 8-input and 8 output (main + monitor) interface offering a max sample rate of 96kHz. Two inputs are mic/line or guitar switchable and two headphone outputs are available, along with LED meters. The Core 8 has a 2U 19” rack format. US price announced is $299.99.

No information regarding the availability of this new Alesis Core Series.