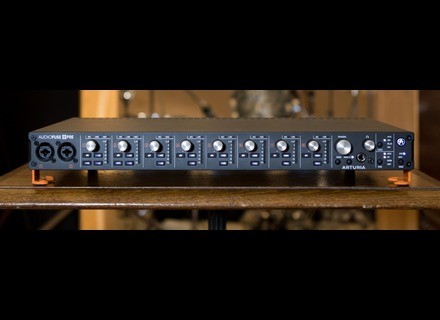 Just over two years ago, French manufacturer Arturia first stepped into the world of audio interfaces. More recently at NAMM 2019, the Grenoble-based company announced two new models, one of which the AudioFuse 8Pre. Has it been a successful addition to the line?

The AudioFuse had seduced us at the time, earning a well-deserved 4-star rating. Indeed, a fair few smart features set it apart from its competitors in an already saturated market, whilst remaining sturdy, compact and offering high performance. It might as well be said straight away, the AudioFuse 8Pre is less unique, and its functions are simple. The design is straight to the point, the 1U rack format offering less room for originality than a desktop unit, but it feels like a well built and serious product. 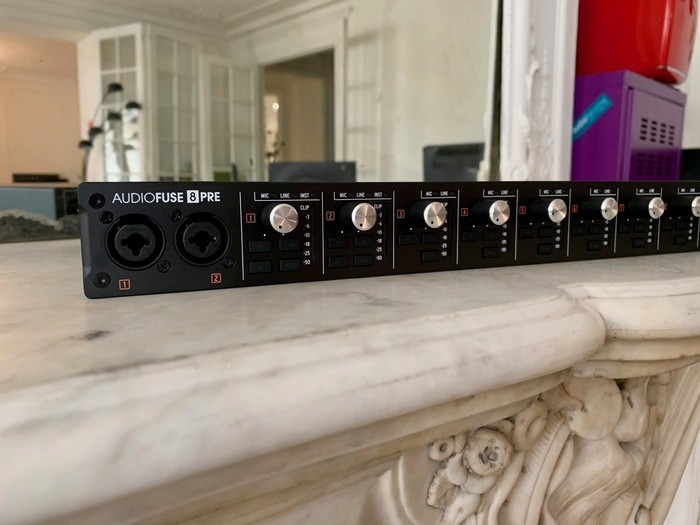 We find on the front plate 8 encoders that control the gain of the 8 analogue inputs available. These can accommodate mic level and line level inputs thanks to its connectors that combine XLR and jack TRS. The two inputs on the front can also accommodate instrument level signals such as those generated by electric guitar and bass. For each input, you can access from the front panel the phase inversion, the -20 dB pad and 48V phantom power. A series of 7 LED provides quick visual feedback of the input signal, and two others indicate the sample rate and clock source. An additional button on the right allows to switch from USB mode (classic audio interface) to ADAT mode. This allows the AudioFuse 8Pre to function as convertor equipped with 8 preamps and be used in conjunction with another audio interface or a digital mixing desk. We end the tour of the front panel with the two volume encoders, one for the headphone output and on for the speaker output. It’s worth mentioning you can choose the source for the speakers between direct and computer monitoring. It is also possible to switch to mono. The headphone outputs is conveniently equipped with quarter inch and and mini-jack sockets. The same good idea as on the first AudioFuse.

In the back, we find the 8 analog inputs with combined XLR and jack TRS, the first two however are also equipped with TRS jack inputs. A cool and uncommon feature.

The 10 analog outputs are made of TRS jack connectors, the Worldclock I/O of BNC and the ADAT I/O of TOSLINK. Finally, on the back is also the power connector and the USB type C port, the latter being compatible with USB type 2 that you’ll find on all computers (and if not, it may be time for an upgrade). 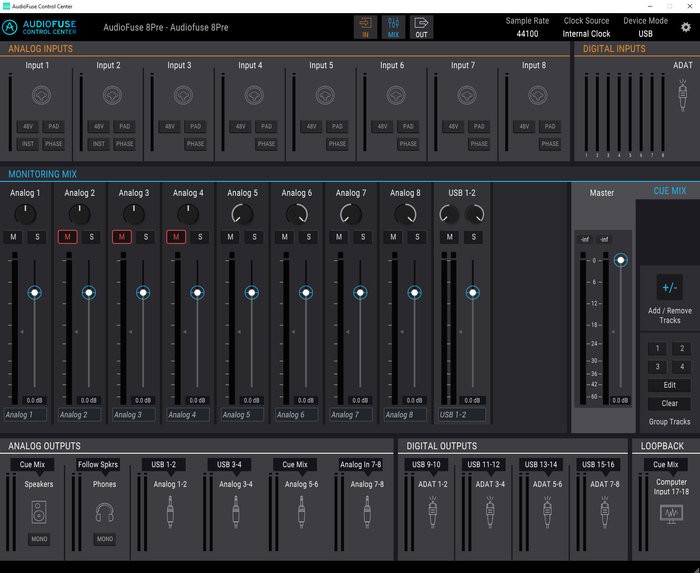 Once the driver is installed, the AudioFuse Control Center opens before our eyes. The first thing we notice: the GUI is not really resizable and takes up a large amount of the screen. Fortunately, we can hide the inputs, the mixer or outputs as needed. For the rest, it's classic, with linear faders, pans, mutes, solos ... The user can choose to display only certain inputs / outputs, can group tracks and choose the source for each input.

The choice remains limited however and we can only choose between several things: the corresponding input, for example the input 7-8 for the output 7-8, the corresponding USB return or the Cue Mix. We aren’t be able to send any source or input to any output as is possible on some other audio interfaces. In fact, there is only one Cue Mix. So, we can only have one mix and it is for example impossible to send a mix to the speakers and a different mix to the headphones. This last point is a shame, but we hope that Arturia will be able to increase the possibilities of its audio interface in a future update.

To end on a positive note: a loopback function returns the output of the virtual mixer to your sequencer to save it. Very useful in some situations. As you can see, the software interface is clear and easy to understand, despite a few limitations.

We have set the buffer size to its minimum value (16 samples) to achieve the best latency: 1.23 ms on the input and 2.14 ms on the output (at 96 kHz). These results are very good, although with 16 samples, your computer will have a hard time keeping up. In order to test the interface, we have set benchmarks with our APx515 from Audio Precision, and we will be able to compare the results with those obtained with interfaces we have previously tested. Here are the results obtained with the line levels: 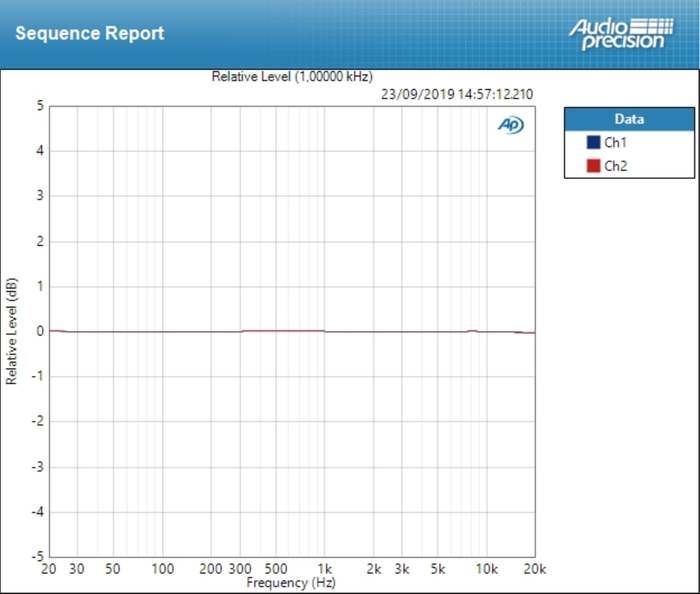 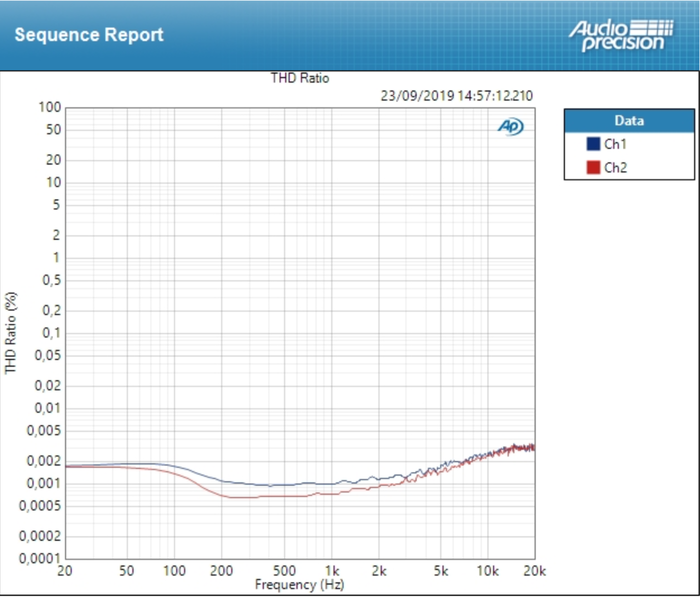 With a deviation of ± 0.024 dB, the AudioFuse 8Pre achieves an excellent result, equivalent to the high-performance Scarlett 18i20 (± 0.022 dB) we tested recently and the main competitor in the sector. That is a great performance, especially given the price of the interface. The distortion is the same, never exceeding 0.003%, it's even better than the Scarlett which reaches closer to 0.005%. For the price, or even in general, it's excellent. 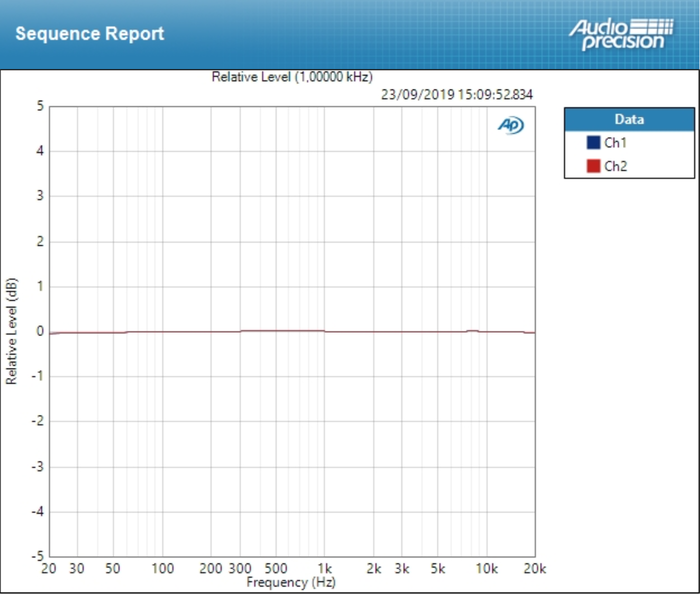 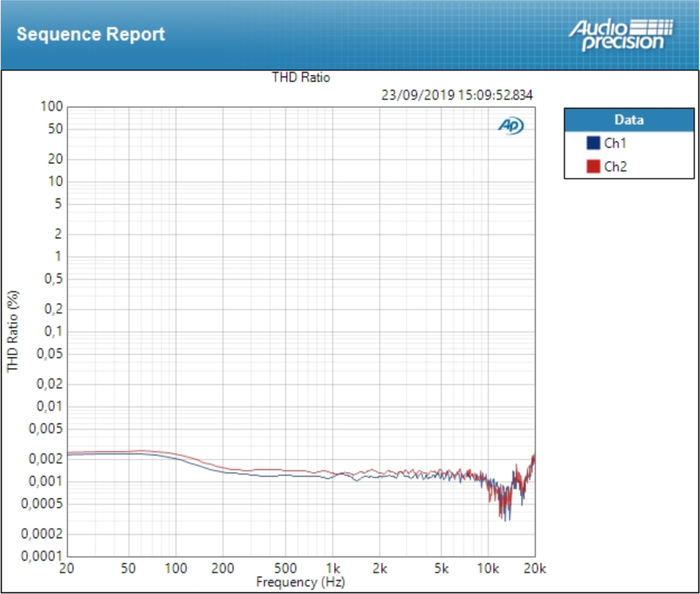 Regarding the bundle, it's good. Being Arturia, the AudioFuse Creative Suite incorporates three virtual preamps with quite evocative names (TridA Pre, 1973 Pre and V76 Pre), the Mini Filter (a Moog type filter), the Comp FET-76 (a 1176 type compressor), the Delay TAPE-201 (a Roland style delay tape) and Analog Lab Lite (a bank of synths, pianos and organs with hundreds of presets). Nothing but quality!

With the preamps set to 34 dB (out of the 75 dB available!), the deviation only increases slightly (± 0.032 dB), just a bit more than the Scarlett (± 0.014 dB), but at this level of accuracy, it is undetectable to the ear. The distortion is simply excellent, staying below the 0.002% mark on most of the spectrum. Nothing to say therefore for the preamp part which, in addition to the big gain reserve of 75 dB (against 56 dB for Scarlett), remains perfectly silent (107 dB, against 100 dB for Scarlett). We are really at the level of the best interfaces tested on AudioFanzine.

The instrument input has a slight attenuation in the high end from 15 kHz and a deviation of ± 0.101 dB, but this will not interfere with electric guitars and basses. Its distortion is of around 0.003%. We end on the headphone output which has the same very slight attenuation in the upper part of the spectrum (deviation of ± 0.119 dB) and a little more distortion when pushed to the limit (0.01%), but it has a huge power reserve (2,827 Vrms, against 1,672 Vrms on the Scarlett). This allows a great level regardless of the headphones used. Watch out for your ears though!

With its excellent audio performance, its bundle and inserts, the AudioFuse 8Pre measures up greatly against the competition. Its only limits can be found in the audio interface part and its routing possibilities, as well as its lack of a few features that can be found in the competition (2nd headphone output, talkback microphone). It remains up to the user if these things will be useful to him. As for those who only want to use it as an ADAT preamp/converter, they can go for it with their eyes closed!