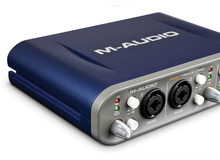 The best USB audio interfaces with two mic inputs under $300

We know you love your first tiny one-preamp audio interface as much as you do your girlfriend, but you have to admit that it probably has become a bit limited, especially since you started playing with other musicians... Are you looking for a two-preamp interface with advanced and attractive features? Have you fallen in love with a model recently?

Last year(!) we asked our French Audiofanzine community to tell us which are the best USB audio interfaces with two mic inputs for less than $300 (250€) right now. And this is what we got back, which as usual we wanted to share with you: 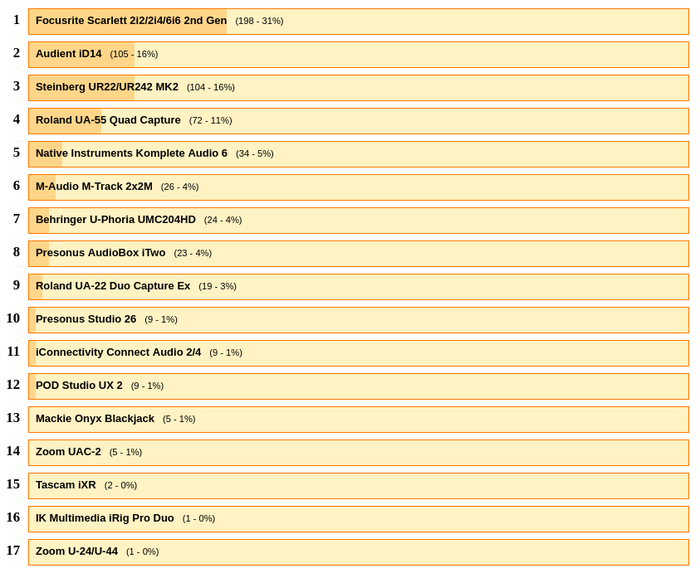 I don't think it's a surprise to anyone that Focusrite landed the first spot in the poll, considering that the last couple of years the company has made it its mission to create a quality entry-level line. Ranging from $150 to $250 depending on whether they feature two, four or six outputs, the 2i2, 2i4 and 6i6 also differ in the number of headphone outputs with volume control (the 6i6 has two) and the availability of a MIDI DIN connector on the 2i4 and 6i6. Apart from these aspects, they share the same components and neat design that have made the product range so successful. The cherry on the cake is that, besides Pro Tools First and Ableton Live Lite, Focusrite also includes in its bundles the Red 2 & 3 plug-in collections, an Addictive Keys piano of your choice, the Novation Bass Station synth, the Softube Time & Tone pack, and 2 Gb of samples by Loopmasters. And if that weren't enough, Focusrite offers special deals every month so its users can get software for free or with interesting discounts. Try to beat that!

Even if their bundle is limited to Cubase AI7, the UR22 and UR242 MK2 have also become a reference due to their excellent value for money and their meticulous manufacturing. After all, Yamaha is behind these interfaces which sell for $149 and $199, respectively. Unlike the Scarletts, it's not the number of outputs but rather the inputs that differentiates them, the UR242 features two more line inputs than the UR22. But it's especially the built-in DSP in the 242 that distinguishes it from its baby brother, with the possibility to benefit from the dspMixFx software and its plug-ins: REV-X, Sweet Sport Morphing Channel Strip, and Guitar Amp Classics. A very nice surprise for the price!

Sold for 300 bucks, the only desktop interface to make it to the podium is none other than the excellent Audient ID14, which we really love for its build quality, performance and well-thought out design. But not only that, Audient also distinguishes itself for its bundles: the ID14 comes with Cubase LE and Cubasis LE 2 for iOS, the Eventide UltraChannel and UltraReverb plug-ins, eight LANDR masters and 20£ worth of lessons on producertech.com. Last but not least, Audient offers lots of pedagogical resources on its very own Tutorial Hub.

Roland has always been a safe bet when it comes to audio interfaces, so it's no surprise that it landed the fourth place with its Quad Capture. Even though not really new, it remains an excellent choice thanks to its Auto-Sens function which automatically adjusts the gain of the mic preamps. It comes bundled with Sonar, which is no surprise if you consider that Cakewalk was once partially owned by Roland before it was sold to Gibson.

P.S. Happy New Year to everybody!