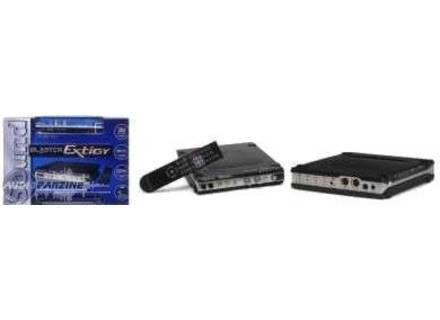 View other reviews for this product:
Purchased primarily for its price "low", the USB connection and multiple outputs in order to record my guitar parts and vocals, but can make the arrangements bass / drums in sequencer software with samples and some vsti
Used under celeron 400, 192MB of RAM (for the rest??)
I will branch between my mixer, and output for the time my stereo.
Careful small jacks for input and analog output

Instalation without any prob in 98SE, but XP galley to run the apps (due to my ancestral config ...)
Creative Mixer complete and intuitive manual rather empty, for example regarding the use of digital outputs ... I cross my fingers!

The drivers provided on the CD were the last updated on the website of Creative.
With Cep2, I had problems with cracking read / write due to bad configuration of my hd (dma box unchecked in the properties of the system). I also have to solve a problem decallage a recording. Since then, I get a run in 16bits 44.1KHz over 20 audio tracks (up to monos) with the config default audio cep2 of quite convincing.
Under FruityLoops3, I had to put the maximum buffer size, otherwise a cracking read, and as long as one does not exceed 3 / 4 sessions per vsti, all runs without major problems (I am far from MUSCULAR a config too)

It's been about a month I use this card, and I must say it enough. I purchased for a mobile phone.
It obviously is not for the mao (no ASIO drivers, multimedia connectivity, ...), but for the use I made, I think keeping it a while:
it will suffice to turn a few vsti, a condition not to use a MIDI connection (latency unmanageable at this time!), and seems very well cep2 accommodate them despite a significant number of tracks (be careful with other sofs. ..)
Impossible to judge the ratio q / p is not a card player ... ft. the only one I had before was in use music that turned a PCI128 well for what I asked. The quality of the converters is certainly superior, but I can not allow me to say!

In summary: full duplex recording Hon (track by track, mono or stereo), has banned use of the South.

I chose it for its multiple outputs, so you can connect monitors and my chain. It is to be used for the CMSS sound of two or three exits, but the volume and quality (I believe it) is at once shared. Maybe a prob of settings? So I decided to pay me for monitors with optical input. So, I already know what will be my next sound card: the m-audio audiophile usb, which has a similar connection and better, with asio, a real card musicos!

To conclude, if I had known for monitors, I would not hesitate and I would pay the audiophile ... for not much more expensive in the end!
Attention, the Extigy is a risk purchase, I took it, deu'm not really seen what I requested, but not a card dedicated to music!
See the source
Did you find this review helpful?yesno
Cookies help us improve performance, enhance user experience and deliver our services. By using our services, you agree to our use of cookies. Find out more.