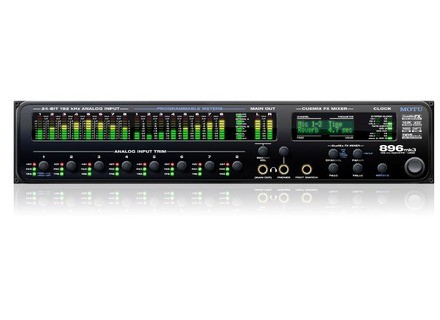 Audience: Beginners
Buy this productView price information >
View other reviews for this product:
I was looking for a REAL sound card for techno sound is - say with buttons and flashing lights all over the place! And filled with connections !!

More Seriously, I recerchais card among 8 combo XLR / Jack Mic / Line / Instrumentation, whose gain can rgler for each channel with -20dB pad and phantom power per channel and a peak indicator dBFS and clips consquent per channel faade before ... and for my budget less than 1000:
MOTU did!

Hybrid His name comes from the fact that you can work via USB or FireWire. Moreover one has even 2 FW 800 ports to be able to cascade MOTU (3 max per port FireWire).

Yes, having an indication via numerous LEDs per channel that enters or leaves in terms of level dBFS, not on all maps found that, even in 2012!

BUT THE TOP is this: Routing willingness!

Voil enough to supply the facade FOH, monitors the returns, and the capture, plus a radio, tl ... our lovely mix stro.

A virtual console controls the MOTU 896 mk3 Hybrid, via software.
We can save / recall presets and configurations.

And all this is possible since BE Virtual Console software, IE from the buttons on the front facade of the MOTU MOTU making autonomous stand alone: ​​no computer needed on stage!

The MOTU 896 mk3 Hybrid is perfect to use, very ergonomic, easy access, a jewel for its techie whose budget can frler 1000 to 8 analog tracks between (and many other digital).

Drivers very stable.
The CueMix console launches in 3 seconds or less.
Sometimes I have to restart the software of the virtual console "CueMix", but it happens rarely VERY close to zero eventually.

I use the MOTU 896 mk3 Hybrid Pro Tools 10, and it is ultra stable, no problem.
The buffer can be rgl with Pro Tools in increments of 64 samples. 128 or 256 samples, it is still playable musically without too much latency.

USB recording 32 Concurrent tracks and playback, Pro Tools 10 and MOTU 896 mk3 Hybrid will not budge. The t test was done with a series of SOnY VAIO VPC, based on Intel Core i5.

Latency is good, 128 as in 256 samples: admarre as dry finger and the eye, and is playable for musicians live.

First install the drivers for the MOTU, then restart.
Then install Pro Tools 10, and Restart.
And voil a rotation as a new truck engine.

Paramtrage of the characteristics of the MOTU can be done in Pro Tools as out audio app. It is simple and straightforward, almost no need doc, even for beginners.

No incompatibilits meetings.
The manual is only for the Frenchman MOTU 896 mk3 Hybrid version not, but that does not change much.

I like the very simple ergonomics of the Motu, the possibility of rgler all parameters via the computer or from the front facade, its ultra rich connectivity, its LEDs for each input channel and out, of course its audio quality, its strength, srieux A Z.
The guts of the front facade could be greater than those 2 lines of characters, but you would do without problem.
Above all, the virtual console CueMix could be larger, resizable: it is the only default of this MOTU.

The rich connectivity is robust, pro, nothing cheap.

The price quality ratio is unbelievable, unbeatable.
Go for it, you will not be due, in all objectivity.
See the source
Did you find this review helpful?yesno
Cookies help us improve performance, enhance user experience and deliver our services. By using our services, you agree to our use of cookies. Find out more.