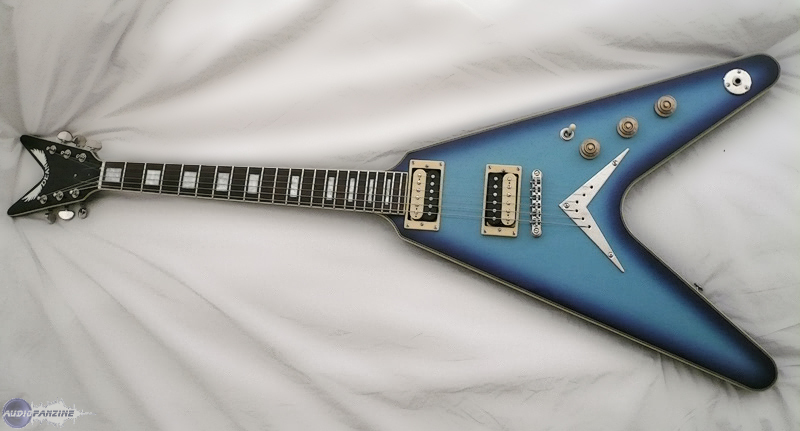 linn134
Publié le 10/20/08 à 18:41
Made in Korea, Dean V Limited is one of the top models of non-US production. The body is mahogany, probably a nato very moderate given the weight of the beautiful.
The neck is also mahogany and has 22 frets on a rosewood fingerboard India very good. There are two humbuckers in double cream & black finish.
The fittings are chrome and includes a bridge Tune-O-Matic and V steel to mount the strings through the body. It&#39;s a classic V. The chrome tuners are Grover oil bath. (The picture above was taken by me)
The controls are divided into two volumes and a tone for the whole, a 3-position switch allows the traditional route to the Gibson.

Blue Burst finish is very successful. I confess I do not freak burst of the usual, but this guitar is the result pleasing. Blue Burst out a bit unconventional, it feels good. The finish is neat as a whole, there is nothing to spoil the violin which is also good outfit. It does not compete with the beautiful V from Gibson but it goes far beyond the Epiphone.

The handle has a D-profile way, between the big log of the Slim Taper Gibs and some are looking for. It is comfortable, even from a strat quickly found his bearings.
Note the fine quality Indian rosewood inlays and key borrowed from Gibson Custom.

V is a so access to nearly treble what is the best. Profile is not a gene and the body-neck junction is felt stuck in the past five boxes, but it remains practicable.

If the weight of the guitar is quite bearable, ergonomics typical V gene is a sitting to play if it was not the reflex of a stall horn between his legs. Standing for the game (most enjoyable) is no problem.
I changed the strings long ago, following advice from the previous owner and fitted Ernie Ball Heavy Bottom 10-52, since I am granted DADGBE is quite suitable.

The sound is always THE question that arises.
The bridge pickup delivers enough power to play aggressive and biting riffs like "big palm mute. Tone bottom but slightly lower volume the sound is softer and directory rock in general is played in broad widths without problems.
Playing with the tone of the music we can feel softer with complex phrasing and arpeggios well defined.
The neck pickup sends the wood needed for the rhythmic play. Not anemic or withdrawal as seen sometimes, it delivers a dose dense air which gives a good accuracy while retaining a warmth and a grain very modern version of Gibson.
Playing with the tone and volume provides an opportunity to make some plans with a bluesy sound "solo" to handle very nice. He collects also very well clean, the crunch and saturation. A bit less defined than the bridge pickup, one should assume the intermediate position for a more sharpness, more slamming.
Intermediate position is precisely here that the phrasing blues or jazz is best managed.
The violin gives it its heat with a combination of microphones, the result can juggle between his pique, velvety arpeggios but very defined and casseroles funk playing with the overall tone and very little with the volumes.

I thought during the first three hours prior to tame him change his pickups. I had planned quite a few configurations, but I gave up because ultimately the balance is perfect and the pickups are quite up to par.
I read on a forum American (or at least Anglophone) that the microphones in this limited series were produced in the U.S. by Dean is credible but I have not dismantled.

This guitar is not truly "versatile". It is suitable for a wide repertoire but does not dethrone a strat register stratum and so on. I needed a guitar exactly complementary, to have different grains, especially for rhythm.
She uses the blues to metal without fail.

I play a Line 6 combo amp, the Flextone3 Plus, and it suits me perfectly.
For recording it is a matter of AmpliTube 2 and AmpliTube Metal presets with handmade.

To characterize the sound: as crystal that can be a solid mahogany guitar with double windings average output level up. So instead of a round, warm, fully complementary with a guitar on a screw shaft body "dry" kind of ash or alder.

I have been using a slow month. This is my tenth guitar, but I only kept one strat Fernandes LE2 Custom (EMG 89/SA/SA) the others are sold. She serves primarily "home studio" to record my compositions-improvisations in a lot of genres a little twisted.

I love the sound of the neck pickup, bridge pickup was not the definition of EMG 89 that my team strat nor his very biting attack. The micro solo is nice, however for large palm mute and blues with the volume down a bit (in 2 / 3 maximum). Combining Channel + Bridge is perfect for sounds more dives with the roundness of mahogany.

I&#39;ve tried or owned a lot of guitars but none with this sound. I dare not even look at the Epiphone Gothic V I played a few months, not that bad but the Epi is not really the same range.

It&#39;s a really good guitar that is quite in the spirit of American Dean: juice, spicy hot without trying to copy the sound of Gibson. This is not a model of Dimebag with microphones violent. The Korean violin is really up on this guitar.

The quality / price is a little difficult to give because I bought this guitar used. Let&#39;s say it&#39;s a very good deal for a serious and rare model, Limited Edition requires.

Update of 11.21.2008 (the previous opinion is September 2008).
This guitar is really fun to play. Its shape makes the game sitting particularly but not impossible and I was open to new techniques, new gaming positions and guided my hands almost insidiously towards a more bluesy style than expected. A change amp gave me the opportunity to pass me (reluctantly at first) I used effects certainly a bit too far. This guitar, not as docile as strat &#39;, and this amp opened my eyes to the importance of expressiveness. Looks like a chicken who found a knife some say, then? Sometimes you need a click of a kick in the ass outside so as not to stagnate in his habits.

Play this guitar on four sounds (clean / hot clean / overdrive / saturation) with just a bit of reverb and EQ to neutral is an exceptional learning. The handle is comfortable and does not forgive mistakes that strat passes. The 3-position switch to provide the opportunity to travel sound that I found (at my level) grandiose.
On almost all the guitars I had the visual appearance led me to love, there is beyond that. The look of the Dean V is debatable, its color is special ... but to play it&#39;s just a big slap in the face.

Yes, sometimes it annoys me, blocking me plans that I can not move and I galley. But when they finally pass I feel this intense and lasting happiness. It gives me the guitar-shaped when the day was tough. A guitar game that requires honest and unadorned, sleek and thoughtful, and which delivers a range of sounds absolutely delicious.
I love this guitar. My Fernandes must have wanted to kill everyone now, but I think this event is well beyond the telling. Besides, I&#39;m not going to add more and I&#39;m going back blues with her.
00