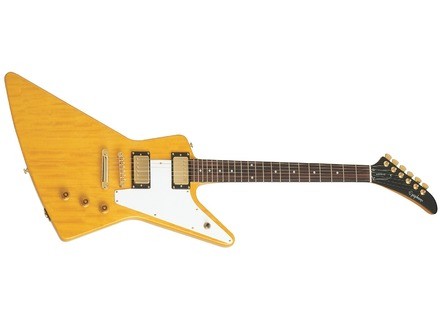 View other reviews for this product:
The Epiphone Explorer '58 reissue is a lower priced version of the original Explorer that was released in the late 1950s as a very new and radical guitar design. It features a Korina body and neck (like mahogany tonally) a rosewood fretboard with 22 frets, Kluson tuners, a tune-o-matic bridge and stopbar tailpiece, and a pair of Epiphone humbuckers based on Gibson '57 Classics. It's pretty faithful to the original model and looks just like the classic Gibsons, except with a lower price.

The design isn't the most ergonomic in the world given that it's very large and cumbersome overall. The bulky shape doesn't really allow for the most comfortable playing surface, but that's no fault of the Epiphone brand, just the design of the guitar itself. It's of a medium weight and the neck has a nice feel to it with a profile that's not really as thick as the baseball bat type ones on some Gibsons of that time. The upper fret access is decent, but impeded a bit by the design of the neck heel and the glossy neck finish.

This guitar sounds pretty good for being a cheaper level import guitar. The clean tones are pretty cool sounding. The neck pickup has a nice bassy quality for jazzy quality, and the bridge pickup is a delight for blues or country tones. It doesn't quite have the sparkle of say, a Fender, but it is very warm sounding in place of that. It has its own tone as a result of the Korina that is different from even a Les Paul or SG. The drive tones are very smooth and clear. I find it works best for classic rock type stuff mainly. Unfortunately it does get a bit muddy when you use lots of gain, so heavy metal probably isn't the greatest choice for this guitar.

All in all I think the Epiphone '58 Explorer is a great guitar for anyone looking for a unique looking guitar that offers a different sound that is based on that warm, thick Gibson tone. At about $500 new it's a decent deal and well worth it if you want a cheaper way to get into one of the most radical solidbody guitars made since 1958.