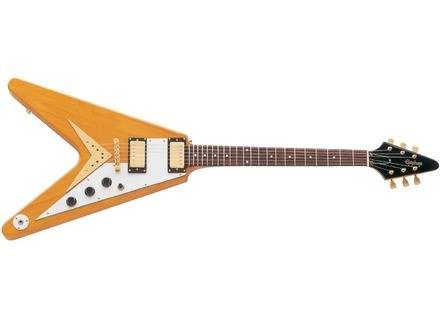 View other reviews for this product:
(Originally written by rhum66/translated from Audiofanzine FR)
- I bought this guitar in February 2009. It was made in Korea, probably in 2008.

So access to the upper frets is better than perfect!

Slim C-profile neck although the fingerboard feels pretty thick when playing. A flat and slim neck for shredders (I guess I don't belong to this category...).

- Nut: I guess it's made out of tusk (bone imitation).

- Bridge: Tune-o-matic copy, seems to be quite reliable. Other special features: no tailpiece but a Telecatser-like string-though-body system for more sustain.

- Machine heads: Gibson copy, they stay in tune but seem a bit fragile (very low quality...). I guess the plastic caps will break with the first impact.

- Hardware: gold finish (which will soon be oxidized given that it's an Asian guitar.

- Playability: Great to play standing. The guitar is light, and the V-shape is comfortable for the right arm. When sitting down you have to adopt a classical guitar position (one wing resting on your right leg). It's somewhat uncomfortable if you played a Strat for 20 years.

SOUND: The alnico pickups and the electronics are ok for a guitarist playing at reasonable volumes without a band (= beginner).

If you play blues rock alone at home with a Digitech Jamman for example, you'll be satisfied. But for any other application (live on stage, band rehearsals, etc.) you'll want to change the pickups (average quality) and the potentiometers (very bad...).

I get a rather good Albert King blues sound (semi-clean/semi-crunch) with a tube amp (Fender Deluxe Reverb RI65) and a Tube Screamer.

I can feel that the guitar would be much better with some good pickups and potentiometers.

Notice: A good Gibson pickup is half as expensive as this Epihone guitar so it's up to you...

- I play blues rock and I'm an Albert King fan, so I wanted to play a Flying V before dying (and without going broke).

I'm thinking about upgrading the pickups with a Burstbucker or a Classic 57 set. To be continued...

- The sound is warm and responsive with an all-tube Fender amp. The pickups provide a lower output level than the P90 installed on one of my Gibson guitars. The guitar allows you to play blues, Rolling Stones-like rock and funk.

- The body-through string concept, which is a unique feature of the Flying Korina (which is to Epiphone what the Telecaster to Gibson) adds clarity and sustain. The sound is twangy in spite of the mahogany.

- The fact that you only have one tone control for both pickups is not a problem. On the contrary, it makes things easier...

- I've been owning it for one month and we are still on honey moon. As I already said, it was my dream to play a a Flying V. Listen to the sound of master Albert...

- For an affordable price you get a rather good guitar with low-quality electronics. The question is: how much would you be willing to spend to upgrade the electronics and the pickups?

- Although I love the V shape it's also a disadvantage when you want to play sitting down because it forces you to play with a strap.

- A nice guitar with exotic wood and golden hardware, it's like owning a Cadillac...
Did you find this review helpful?yesno
Cookies help us improve performance, enhance user experience and deliver our services. By using our services, you agree to our use of cookies. Find out more.