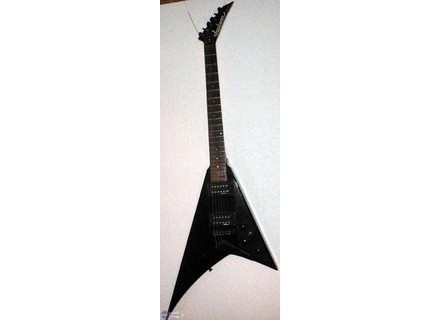 Value For Money : Excellent
View other reviews for this product:
Korean manufacturing cheap, but nice for a small scratch upgrade
the neck has 22 frets, 2 humbuckers, two volumes, one tone, one 3-position toggle switch type Gibson
the strings through the body, it was just a bridge without tailpiece
the handle is screwed

I put a 5 to remain neutral

The neck is thin enough, in the pure standard Jackson and Ibanez, but no frills, no binding, marks round any animals, not fancy
body shape allows access to acute friendly enough, but prevents the game sitting (or by setting the lower point between the legs ... anyway this kind of guitar is not made to sit the game)
the weight is reasonable, but the size of the beast requires a careful if you jump around while playing, because the upper point is likely to take the slightest shock (still weak)
violin making is correct, but as mentioned above, without fantasies
the strings through the body, it has a right to sustain pretty cool, but comes close to a Gibson

I put a 8 for access to acute and to sustain

Not having kept the original pickups, I can not judge them, they were favorably changed by a set of EMG 81 and 85, which in dépotent wickedly distorted (the couple is fairly well matched with the look of the granny all look at her)
I used it on a lot of amps and racks, and microphones go well, clear, full, but it is a characteristic of the EMG, they "embellish" almost any excavator which they are mounted as long as the handle is playable

I use it in cycles from 10-12 years, with hindsight, it is a basic model, may be too well, I do not remember how I had bought at the time but I'm the second or third hand, it has been tuned over the years, microphones, electronics, mechanical (the Grovers)
I prefer being the guitars a little less "cheap" with a richer finish, (such as binding, style guides shark tooth), but especially today sorely lacks vibrato
this remains a very good guitar, with its flaws, however, is a guitar to play metal, its shape is immediately agree, so if you're a bear wire, closed to any other musical style, go for it, otherwise if its eyes on the classical or jazz, are planning a second guitar or go your way.
When I bought this guitar, I was pretty straight forward thrash blocked / disto has the plaster off, I'm a little less radical today, but it is always small effect when I draw.
At the time I shall have made a 10, I would put today 7 for the cheap side and lack of versatility, catching the aggressive side note.
See the source
Did you find this review helpful?yesno
Cookies help us improve performance, enhance user experience and deliver our services. By using our services, you agree to our use of cookies. Find out more.