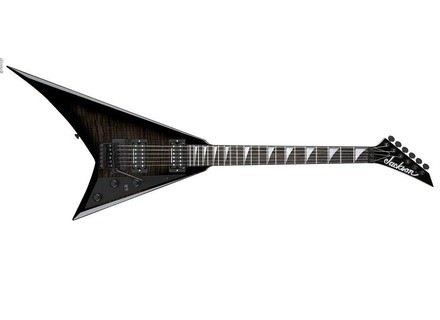 Buy this productView price information >
View other reviews for this product:
This is an American made guitar by Jackson. It's a remake of Randy Rhoads' guitar. Randy Rhoads was the guitarist for Ozzy Osbourne, among others, and is a legend of early Heavy Metal. This guitar has an alder body with a maple neck and rosewood fingerboard. It has an interesting, flying-V like shape. It has 24 frets and Seymour Duncan humbucking pickups, two to be exact. It has a three way selector switch as well as three knobs (2 volume and tone).

Playing this guitar is really easy if you are a rock player. Honestly, there's nobody else who'd be interested in this, so playing this type of music is more or less mandatory on this one. The guitar is setup to play lightning-fast riffs and licks, and playing it is like butter. Getting a good sound out of it depends on how distorted your guitar is, but having the right amp or distortion pedal will make it easy to sound good. It's not too heavy of a guitar, and I think it'll be easy for most people to carry around.

This is strictly a hard rock, heavy metal player's guitar. For that type of music, it is great. It actually has a little bit more tonal variety than the average metal player's guitar would. For instance, it can get dirty, guttural, and heavy, or it can be brighter and crisper, depending on the level of gain, pickup switch, and amp you use. I definitely think though, that it sounds best for metal. Especially of the hair metal variety, like Ozzy or Sabbath, or maybe even Metallica. The clean tones aren't much to write home about, but you can get some really rocking distorted parts. And the sustain on the leads is pretty ridiculous. It doesn't really work for most of what I do but I can recognize that it's a sweet metal guitar.

This is one of the better metal guitars in my opinion, as well as being one of the better "Signature" models of guitars that I've seen. I think it's a reasonably priced guitar overall, as it's not too bad. I wouldn't say it's my go-to by any means but I'd certainly like having one if I played in a metal band. Highly recommended to people who feel that they are into the music I described.
Did you find this review helpful?yesno
Cookies help us improve performance, enhance user experience and deliver our services. By using our services, you agree to our use of cookies. Find out more.