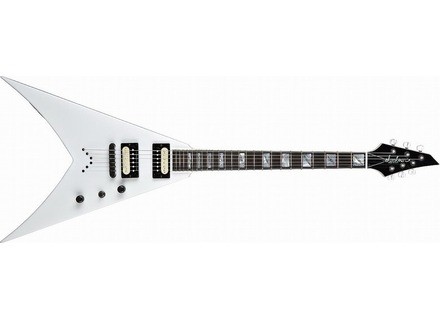 View other reviews for this product:
The Jackson King V KV2T is the hard tail version of one of the two most iconic Vs that Jackson has to offer. It's a more "metal" version of the original Flying V that Gibson offered, and while it was originally built for Robbin Crosby, Dave Mustaine is probably the most notable user of this guitar. It features an alder body, maple neck with ebony fretboard and shark fin inlays, 24 jumbo frets, a hard tail bridge, HH configuration, volume knob, tone knob and a 3 way switch.

Thanks to the hard tail bridge, it seems to be a bit more resonant than the original version. To be honest, I'm not a huge fan of the way Vs are when you sit down. They feel very uncomfortable to me as you have to sit in a classical style and support the neck a bit. That said, the guitar has very nice access to the higher frets thanks to its neck-thru body. The coolest thing about this guitar is the compound fretboard radius. This allows chording at the lower register to be much easier, but huge bends at the higher frets don't fret out like they normally would.

The guitar, while mostly being portrayed as a rock/metal machine, can do most any style thanks to its pickups. The JB in the bridge is an extreme versatile pickup that can really cover most any style, and thanks to this wood selection, it allows it to really shine. The neck pickup in this guitar is actually a JB as well. While I'm not a huge fan of the JB in the neck, it can work for some people. Personally, I swap it out for a Duncan '59.

I'm more of a floyd guy, so I tend to gravitate to the original King V (or better yet, the RR), but this is a great guitar for those who like hard tail bridges. Given that they're a bit expensive new, I recommend looking on the used market for one of these. You should be able to find plenty of deals on eBay and forums.
Did you find this review helpful?yesno
Cookies help us improve performance, enhance user experience and deliver our services. By using our services, you agree to our use of cookies. Find out more.