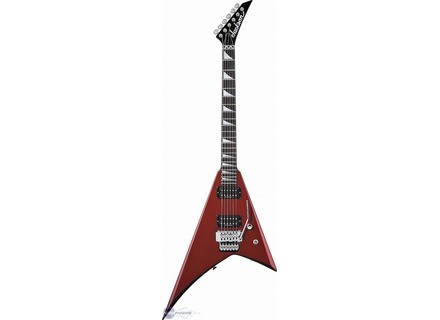 View other reviews for this product:
I bought this guitar at musicians friend for $489.99 for cherry sunburst and for the solid colors it was only $439.99. I bought it because i am an intermediate kid looking for a guitar that will last and have a tremelo system.

I like the finish it has killer looks the cherry sunburst paint is gorgeous. But thats about it. It was just good looking ohh yeah it also did have a reallly really fast neck.

I hated many things about this guitar but first is the whoel floyd tremelo JT-500 bridge and tremelo. It must take a couple of hours to string and tune it compared to about 15 minutes on my ibanez GAX 70 which was about 300 dollars cheaper. You have to cut the o ring off the end of the string in order to get it in there and if you loosen the string clamp to much on the bridge it falls out and its a bitch to get back in. NExt is the tremelo bar if you accidently tun it one to many times the piece that screws in to the guitar itself and the tremelo bar screws into that piece the little piece comes out wtih the tremelo bar. Next is the tuning keys on like the bottom three strings you have ot turn them 360 degrees about 10 times just to tighten it a little bit. WHen your tuning it and its just a little under perfect you have to turn the keys about 10 times to even get the needle to bounce. NExt is that the neck is set wrong i think. because it says in the manual between the top string and the top of the twelfth fret there should be about 1.5 mm clearance. adn i adjusted it to that and on th e second fret the string was damn near touching so i had to put it up to 2.8 mm and it still just barely buzzes so its pretty hard to push down 3 milimeters to make it sound right. Also there is only one volume know and no tone or other knowbs just a volume and a 3 way pickup selector. and the volume knob isnt even tightened down when ya get it so dont tip it upside down. and if you tighten it after about a week its loose again. another bad thing is dont buy this guitar if you play a lot sittn down it just slides down your leg bacasue of the v shape. ONe more thing thats wrong about it is that if you bend back with the tremelo bar the strings will fall out after about 5 times.

who ever thought this up its now worth the money my ibanez would kick its ass and so would my epiphone. its not great .

its not worth the money. BAD GUITAR.