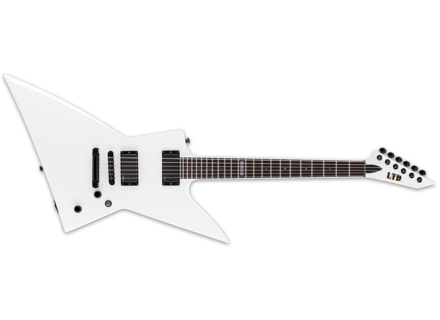 View other reviews for this product:
The ESP LTD EX-401 is one of the newer explorer style bodies that LTD has released. This is for those who don't want to shell out the money for the expensive ESP model but still want a decent guitar. This guitar features a mahogany body with a maple set neck, a rosewood fretboard with 22 extra jumbo frets, dot inlays with the name at the 12th fret, a TOM hardtail bridge, two humbuckers, one volume, one tone and a three way switch.

The guitar is built pretty nicely considering its price. The fretwork wasn't perfectly rounded on the ends, but it was smooth enough to where it doesn't cut your hand when sliding up and down the neck. The finish itself was done pretty nicely, although I think it was a bit thick. This is a common issue I have with LTD guitars, but that's just kinda how they are. The frets themselves were fairly level, so no real issue with high or low frets when it came to moderate action. I also like that they used real EMGs, too.

The guitar sounded very nice and resonant. The EMG 81 in the bridge has a great aggressive attack that worked nicely with the mahogany body. The maple neck helped add some bite, and the rosewood fretboard helped keep the super high presence under control. The EMG 60 in the neck worked out nicely for clean tones, and the lead tones gave this single coil kinda sound. However, I much prefer the EMG 85 in the bridge as it's fatter and more powerful. It's easier to do real fast legato lines with the EMG 85 than the EMG 60, in my experience.

If you're looking for a more extreme looking explorer style body and don't want to shell out the cash for a more expensive ESP, this guitar is a pretty good alternative. It was resonant, it had real EMG pickups, the fretwork wasn't bad, and the finish, albeit thick, wasn't too terrible. I'd definitely consider this as a nice gigging guitar.
Did you find this review helpful?yesno
Cookies help us improve performance, enhance user experience and deliver our services. By using our services, you agree to our use of cookies. Find out more.