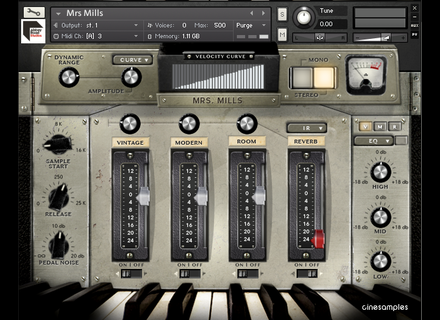 The pianos were recorded in the Studio 2. The Kontakt GUI offers three mixes that can be used simultaneously: Modern with three pairs of condenser mics, Room with a Decca Tree mic setup and a pair of ambience mics, and Vintage that uses the same microphones as in The Beatles’ setup: AKG D19c cardioid dynamic microphone, Neumann U67 and AKG C12 cardioid condenser models and the original REDD.37 console.

It also features a velocity curve control, an effect section comprising EQ, stereo width, saturation and filters that you can adjust separately for each mix, and Sample Start, Release and Pedal Noise knobs.

Abbey Road Classic Upright Pianos will be available on April 9th, it will require Kontakt 5.3.1 and later. Information is already online at cinesamples.com.