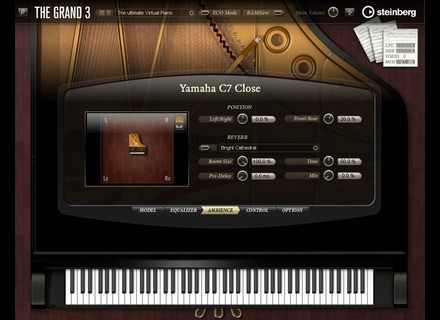 The Grand 3, Virtual Acoustic Piano from Steinberg in the The Grand series.

Classified Ads
Forums
« All news regarding Steinberg The Grand 3

Seinberg Media Technologies has announced that its major update to The Grand is now shipping to resellers worldwide*.

The Grand 3 supports VST3, VST2, AU and ReWire and runs on Mac OS X, Windows XP and both Windows Vista 32- and 64-bit versions.

It offers the sound of three concert grands, as well as electric and upright pianos, all recorded in "outstanding" quality with two microphone positions in up to 20 velocity layers, according to Steinberg. Additional features include onboard equalization tools, a full tuning editor, a range of technologies to enhance computer resource efficiency as well as a stand-alone mode.

Reverberation
The Grand 3 comes with a convolution reverb based on the same technology used by REVerence, the VST3-based convolution reverb processor already featured in Cubase 5. It boasts realistic natural space simulation, emulating any acoustic environment — from the smallest live music venue to the most impressive cathedrals, Steinberg promises. This reverb includes a number of impulse responses designed to put the characteristic sound of some of the world's distinctive settings in one's hands — both in stereo and surround.

An algorithmic reverb is also included to increase the amount of reverbs. With more than 60 reverb presets.

Equalization
An equalizer offers full four-band parametric control that works as a sum over all output channels with variable response curves and shelving modes, as well as analog-style peak filters.

Tuning
The enhanced tuning editor is designed to provide customizable scales and several presets for tempered and concert tuning. Each tuning situation may be stored and retrieved as preset whenever required, according to the company.

"For the record: The quick-idea scratch pad in The Grand 3 standalone version guarantees that all flashes of inspiration are recorded. Simply hit the button and The Grand 3 records everything played — now there's no excuse for missing that one tune. With the scratch pad allows the recorded sequence to be played back for rehearsal purposes or exported as a standard MIDI file.

It is also possible to load MIDI files and play them back as well."

"Never miss a beat: The metronome integrated into The Grand 3 standalone version is a useful tool, providing a range of preset speed styles (Adagio, Moderato, etc.) and helping musicians keep a constant tempo while practicing the most difficult of piano pieces."

*Dates of availability may vary regionally.