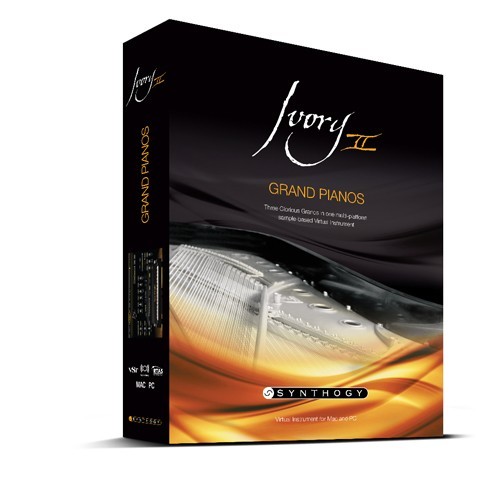 Synthogy has announced that it will begin shipping IVORY II – GRAND PIANOS through its distributor ILIO and retail stores on September 13, 2010.

Ivory II – Grand Pianos will be the first of Synthogy’s new products to feature the new Ivory II piano DSP engine. It is the first major upgrade to all of its Ivory pianos since they were first launched. Improvements have been made to both the piano DSP engine and to the integrated sample libraries that come with the products. Following the release of Ivory II – Grand Pianos, the Ivory II upgrade to Synthogy’s Italian Grand will be available near the end of September, while the Ivory II upgrade to Upright Pianos is expected later this year.

Synthogy’s Harmonic Resonance Modeling technology represents a breakthrough for realistic Sympathetic String Resonance in a virtual piano. Harmonic Resonance Modeling is not based on sampling, but rather on a new DSP technology that excites the harmonics of the held, un-damped notes, just as in a real piano. Only notes struck that are harmonically related will cause the notes held to ring “in sympathy”, and because the actual harmonics of the notes held are being excited, the sound and imaging are completely natural. Additionally, the amount of harmonic ringing also varies naturally with the dynamics of the user’s playing; strike a note harder and overtones on the held notes ring louder. Striking a different note that is harmonically related will excite different overtones in the same held note.

Dozens of new presets are offered that take advantage of these new enhancements. In addition, all of the Ivory 1.x presets are included. For older user presets, Ivory II is backwards compatible. All of these improvements have been designed and implemented to "make Ivory II more flexible, expressive and realistic."

Upgrade paths are available to users of previous versions of Ivory products. Ivory II – Grand Pianos will be distributed in North America by ILIO.