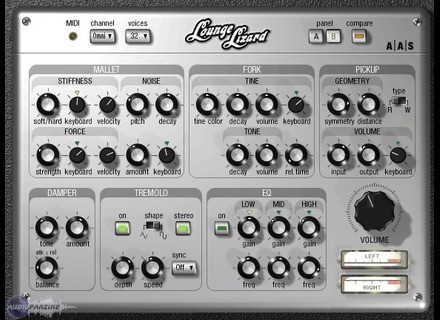 View other reviews for this product:
So far, no compatibility issues.  I run a Macbook with Logic 9 and Ableton 7.
The manual is clear and sufficient enough.  I haven't really needed it to much for my purposes.  I run it mainly in Logic, so midi mapping is easy.  I don't use it as a standalone, but if I did, the manual explains very well how to midi map directly to the program.
The setup/configuration is very simple.  All the main parameters are right in front of you, including a drop down menu featuring all the effects offered.
Yes, all the typical functions are accessible.  They are all right in the main window.

Yes, the plugin works great in both Logic and Ableton as well as standalone.
So far it has never crashed on me, or lost any preset/saved data.
As for performance, no latency (at least none that I can hear) and all midi mapped features work great.  I am pleased with the technical side of things.
I have been using this plugin for about 5 months.

What I like most about this unit is the Wurlitzer patches.  The Lounge Lizard is my go to plugin for the Whurly.  It is very warm and realistic enough for a plugin (totally kicks the but of both Logic and Ableton's built in Whurly sounds).  I also enjoy the "Classic Tracks" presets.  I am a fan of Jamiroquai and it was cool (and audibly pleasing) to see/hear the Distorted Whurly sound from the song "Black Capricorn day."  Very very close representation.
What I don't like about this plugin is most of the Rhodes Patches.  Most sound pretty weak and when you really mash down on a key, you can really hear the "digital" side of things.   In all fairness, I do own a Real Mark 1 Rhodes, so I may be biased.  For a Rhodes plugin, I go with GSi's MrRay73mk2.  In a fight, GSi's kicks Lounge's But.  However, some of the Rhodes patches are Ok (like the Mellow Rhodes) and I use them for the sake of a different sound sometimes.
I believe my studio partner paid a little over $200 for it.  Thats a pretty standard price for a decent plugin, and I would say, because of the Quality of the Wurlitzer patches, its a fair price.
As mentioned before, the whurlys are High quality for me, the Rhodes, not so much.
Yes, I have used the GSi mentioned earlier, Logic and Ableton's built in ones, and also a few found in big sample libraries like IK Multi's Sample Tank.  I would say out of all of those, it ranks in second, behind the GSi.
Well, I would not buy this product again if I found a better Wurlitzer plugin for the same price (or cheaper) since that is the only function I consistently use in this plugin.
Did you find this review helpful?yesno
Cookies help us improve performance, enhance user experience and deliver our services. By using our services, you agree to our use of cookies. Find out more.