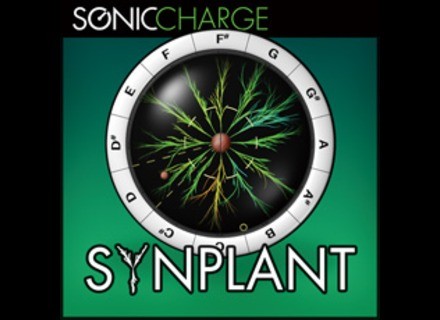 Since the dawn of synthesizers, there have been many types of synthesis to emerge. But the same can not be said about their approaches to work flow or interfaces. With Synplant, Sonic Charge has taken inspiration from the world of plants and their growth patterns in order to come up with a new way of creating sound. Marketing ploy or innovation?

Since the dawn of synthesizers, there have been many types of synthesis to emerge. But the same can not be said about their approaches to work flow or interfaces. With Synplant, Sonic Chargehas taken inspiration from the world of plants and their growth patterns in order to come up with a new way of creating sound. Marketing ploy or innovation?

The first thing to know about Synplant is that it’s an AU and VST plug-in that's Mac and PC compatible. So far, so good. But soon we find ourselves in unfamiliar territory. First of all, the interface is quite minimal: a big round dial, referred to as a “bulb” (it kind of looks like Ueberschall's loopeyes), surrounded by 12 buttons that represent the 12 half-steps of an octave, a patch selector/browser, four buttons and seven sliders, and that's all (for now). The way it produces sound is as follows: you plant a “seed” in the center of the “bulb” and grow branches out from this seed (yes, really). Pretty original, right?

Let's try it, then. A click in the middle of the screen, and a seed appears, accompanied by a brief sound (each seed contains its own particular sound). You can also right-click, which opens a menu offering, amongst others, the same function (more on this later). You can always jot down the name of the seed just in case (in order to stay within the botanical theme they've chosen some complicated ones), but you can't choose one directly since new seeds are chosen randomly. One solution: open a Seed and save it as a preset without touching any settings. This can be done in a separate folder. Just as an indication, after generating 215 Seeds (whoa. ..), I only had four duplicates (same name, but not the same sound). Sound production is completely and utterly random.

Then, from out of this seed grows 12 branches, each corresponding to the notes of the octave on the outside of the bulb. When the branches are at there smallest (like when a seed is created), their sound is identical to the Seed. One of Synplant's main principles of sound creation is to elongate these branches (in real time) to get a different sound.

The first point of interest: each branch produces its own sound. The further you grow a branch from the seed, the more different it will sound. This lets you create both a different sound for each half-step, as well as just one sound for the whole octave. And to do so is very simple since all you have to do is select a branch (the space around is delimited by dashes), right click and choose Clone Selected Branch. The other 11 half-steps are replaced by the one chosen.

Another option: each branch becoming a seed. When you find a branch that you like, you can plant it as a new seed using the menu and the Plant Chosen Seed command. The seed will then have the basic sound of the branch from which it was formed, and the remaining 11 branches will develop other sounds. This, in theory, means that the principle of sound production is infinite and above all extremely simplified! Plant, grow, clone, re-plant, re-grow, etc.

Around the dial, the sliders adjust a few parameters: tuning, atonality (which makes a sound atonal or fully tempered), release (which doesn't have an effect on all seeds, since some have short sounds), effect level (variable and as random as everything else, reverb, echo, chorus, etc.). Then there's wheel scaling (which changes the scale of the mod wheel in order to grow and shrink branches at will), velocity sensitivity, and the master volume of the synth. Lastly, Rotation lets you change which branches are triggered by which keys.

A few examples to clarify things: first let's plant a Seed, called Dolens Pateo and play a chord. Then tweak the mod wheel on the same chord to hear the branches grow (yes, I know it is sounds ridiculous ...). We then vary each branch individually. Let's say we like the second one at about two-thirds of its growth, we then clone it to all others (Clone Selected Branch), here's the same chord with the new sound. Then Moving the mod wheel again. Now all you have to do is save the preset.

For the second example, we'll make a seed from the G# branch (the one we modified in the first example) and plant it using the Plant Chosen Seed menu. Here's the chord with the new sound. And the same chord with the mod wheel all the way up. So, the sound changes again. And you can repeat this indefinitely. In various branches of the first and second examples, many sounds or noises are usable. Here's another example: a sustained chord with changes made using only the mod wheel and the atonality setting.

All this demonstrates the random side of the synth. No specific direction or destination, only following and responding to what you hear. But nothing prevents you from refining and fine tuning things through the Manipulate Genes feature.

When you open the menu, via the dedicated button or right-click/Manipulate Genes, you come across a nice looking DNA-type helix, which teaches you more about this synth. There is, after all, a lot of heavy and complicated synthesis going on behind its unusual interface.

Two oscillators, A and B, each with a noise generator pass through a filter. Oscillator B also has a Sub Osc and a Sample & Hold. Each oscillator can produce all the basic shapes (sine to pulse), presets are also provided, and of course generate all complex forms by addition, and also by FM since B can modulate A. The oscillators then pass through two parallel resonant filters, with adjustable separation. A little time is needed to get used to using this double filter, since cutoff frequency depends on the frequency of oscillator A.

There's the same learning curve for the envelope (one per voice, common to volume and modulation assignments), since you won't find a classic ADSR or AHDSR but a Shaper Env and Env Generator set, providing an adjustment consisting of "env tilt", which includes attack and decay that have their separate volume ( "vol atk and vol dcy"), "env loop" (the looping of these first two elements), "env time" (the total duration of the envelope outside of sustain and release) and release (on the main interface) supplemented by “vol sus”, which sets the sustain level of the sound. It's a little confusing at first, although you quickly get the hang of it. But something simpler would have been nice, as well as there being at least two separate envelopes, one for volume, one for modulation, although there are separate settings for the action of the envelope on both of them. To put it more simply, you can only "draw" one envelope form, but you can set different attack and decay for modulation, and a different attack, decay, and sustain for volume. This is one of the settings that you'll change most often, since you can adjust almost all other settings directly from the main interface bulb, hence the desire for simplification. After all, a good old ADSR always does its job perfectly ...

Still on the subject of modulation, Synplant offers practically one at each stage in most settings ( filters, pitch, S & H, Sub, FM, velocity, etc.). First, via the envelope, then through the direct reaction to velocity, followed by another S & H and an LFO (sine). Lastly there's an effect that combines reverb and chorus, with adjustment for length, size, decay, chorus and mix.

Add to that full MIDI Learn for all parameters on the main interface, loading/saving/changing Midi presets, finely controlled pitch bend, a tutorial at startup, and an interactive help menu in the Manipulate Genes window, and your ready to produce serious sound.

No doubt, originality pays off. First of all, the presets show that you can get all kinds of sounds, from typical FM pluck (with mod wheel effects) to ethereal choirs, a pseudo-Rhodes to an unstable pad, a classic lead to a prog pad, all with the surprising results that using the mod wheel brings.

But where this synth is really interesting is in its sound production, which forces us to rethink our whole approach. It’s more like a voyage rather than thinking in terms of frequency, timbre, pitch, etc.. And, if you accept this premise, you have to admit that the interface is absolutely brilliant. What's rather reassuring, is that in terms of sound you don't come across new sounds that are totally unusable (there are some, but not many), which is something you might assume after seeing the interface. There is always a direction to explore in one of the branches.

A few small drawbacks, like the unnecessary "complexity" of the envelope or the lack of clarity in the filtering, do not spoil the pleasure of working with Synplant, which generates as many new sounds as it does new compositional ideas. So, marketing gimmick or innovation? Innovation, kudos to Sonic Charge.