These synths may be lesser known, but they sound awesome

To help you avoid making music that sounds like everyone else’s, I want to tell you about some premium-quality soft synths you may not know about. Although none of these instruments are terribly obscure, each deserves more attention than it normally gets. Some are relatively new but haven’t gotten much ink, while others are all but forgotten by anyone who doesn’t use them already. Every one of them runs as a plug-in on Windows and Mac OS X, and two — Tassman 4 and Circle2 — run standalone, as well. Each is unique and probably very different from other soft synths you’ve used. When you’re looking to stand out from the pack, different is good. 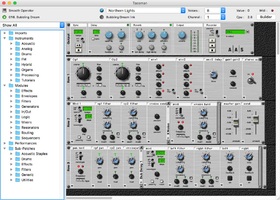 Tassman 4 ($349) has long been one of my secret weapons. First introduced about 15 years ago, it’s capable of some very unusual and original timbres. Despite Tassman’s longevity, Applied Acoustic Systems have kept up with the technological times, and version 4’s capacity for classic physical modeling is still up there with the best of them. I can almost guarantee that using it will teach you a few things about sound design you probably didn’t know.

Tassman is a modular construction kit for building synthesizers and effects processors. It supplies all the sound generators, resonators, filters, envelopes, sequencers and other components you’re likely to need to design and build your own synth from the ground up. Even if you have no desire to start from scratch, you’re certain to appreciate Tassman’s versatility. It comes with an ample variety of patches, presets and devices of all kinds, which you can customize and use as inspiration for your own creations. If you want a tremendously versatile, modular, physical-modeling synth, even if you think it looks like more than you can handle, don’t be afraid to investigate Tassman 4. Download the demo version here.

Bubbling Dream: Although its specialty is physical modeling, Tassman 4 can produce some very warm sounds. 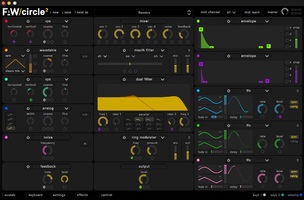 Circle2 ($129) is a modular synthesizer, but not in the same sense that Tassman is modular. It has modules — sound sources, modifiers, and modulators, in particular — that you enable as you need them by turning them on. Circle2 has four audio oscillators, for example, but you only enable the ones you’re actually using. Disabling unused modules streamlines your patches and conserves your computer’s processing power. Another aspect that makes Circle2 similar to traditional modular synths is that you connect modulation sources to destinations by clicking and dragging between them. It’s a bit like using patch cords, but color-coded dots appear onscreen instead of virtual cables.

Each oscillator lets you choose from analog modeling, wavetable synthesis, and vector phase shaping, a type of phase distortion synthesis resulting from sine wave modulation. Circle2’s wavetable synthesis lets you choose any pair of single-cycle waveforms from a bank of 110 and morph between them using a slider or modulator—usually an envelope, LFO or step sequence. You can also add your own waveforms by converting monophonic WAV files using the companion app Circle Wavetable Generator. Circle2 comes with dozens of excellent factory patches organized by decade, from the 1970s to the 2010s. If you want to give it a try, download a demo here.

Retro G Funk: The sounds you get with Circle2 range from classic to modern.

Brostep 2 Bar Groove: Some of the factory patches are edgy and complex. 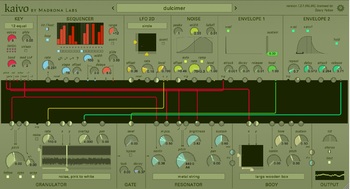 Kaivo ($129) represents the bleeding edge of timbres you can create when you have the right software. It’s almost certainly unlike anything you’ve used before, and at first glance, it looks almost alien. Fortunately, it has an excellent manual that includes one of the best explanations of granular synthesis I’ve seen.

Kaivo generates and modifies sounds by combining physical modeling, sample playback and granular synthesis. Much like a traditional modular synth, you connect various functions with glowing cables that appear when you click and drag between patch points. Like a modular setup, Kaivo encourages experimentation and exploration, as in, “What would happen if I connected this output to that input?” The factory presets are especially useful as starting places for creating your own timbres. The sounds include modeled acoustic instruments, realistic bells, atmospheric pads, evolving textures, unusual percussion, and free-running “machines” that defy description and ignore what you play on the keyboard, as well as patches specifically designed to help you understand how Kaivo works. Download a demo here. 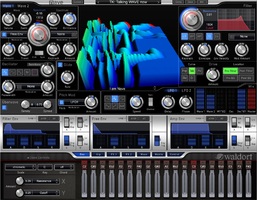 Making its initial appearance as an iPad app, a more advanced version, the Nave Plug-in (€149) is now available for your computer. Nave demonstrates quite effectively the advantages of wavetable synthesis and makes it possible to create sounds you just can’t get any other way. It lets you dig in and gets your hands dirty with wavetables better than any other synth I know. In addition to supplying 83 factory wavetables, Nave can resynthesize audio samples to create new ones, which means you can turn any recording into source material. It also boasts the amazing ability to convert typed text to speech and use the result to create new wavetables, and it does it quite effectively.

Nave’s graphical user interface is dominated by a colorful 3-dimensional wavetable display. A separate wave display furnishes an assortment of options for viewing and editing wavetables in greater detail. Nave has two wavetable oscillators, as well as a third oscillator that generates virtual analog waves and noise. The third oscillator can generate as many as eight identical signals and detune them relative to one another to thicken their sound.

Nave comes with some spectacular and inspiring factory patches, but they only hint at what a powerful tool it can be for creating your own. If programming original sounds using original source material is your goal, Nave is the right tool for the job. Get a demo license here.

Soft Gesture: You’d be hard-pressed to recreate some of Nave’s sounds with other synthesizers.

Belly Dance: Even without a sequencer, Nave generates some pretty compelling grooves. 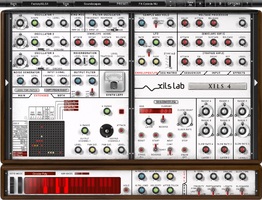 Released more than year before the Minimoog, the EMS VCS 3 was the only complete, truly portable synthesizer you could buy in 1969. Instead of patch cords, it made connections using pins inserted into a matrix. Famously unstable, the VCS 3 was a favorite of artists such as Brian Eno and Aphex Twin, and it stood out on tracks such as Pink Floyd’s “On the Run” and “Welcome to the Machine.”

Like the original, XILS 4 (€179) is a matrix-based modular instrument. It is more than an emulation of the VCS 3, however. It faithfully emulates a pair of VCS 3s linked together as a single stereo instrument connected to a 256-step EMS Polysequencer. Because it’s totally modular, XILS 4 has no hardwired default connections, so if you want the VCO routed to the VCF, you must connect them. If you want the keyboard to trigger an envelope generator, again, you must connect them. All connections are made in one of three patch matrixes.

XILS 4 comes with almost 700 well-organized factory presets that show off its capabilities, though honestly, some sound pretty awful. If you’ve always wanted to get to know the VCS 3 but your chances of ever owning one are nil, XILS 4 may be as close as you’ll ever come to the real thing. In fact, it operates and sounds more like the original than just about any soft synth I can think of. Download a demo here.

Cp FX3 II: If there’s one thing the VCS 3 could do, it was sound effects, and XILS 4 is every bit as good at making weird sounds.

NU St Vocal Pad: Take a synth from the 1960s, emulate it in software, and use it to create a polyphonic vocal choir. This is what you get.

Geary Yelton is the former senior editor of Electronic Musician, for which he's been writing continually since 1985. He authored two editions of The Rock Synthesizer Manual and served as staff synthesist for three major Atlanta recording studios. Currently, he's a freelance writer and consultant for the Bob Moog Foundation in Asheville, North Carolina.

Next article in this series:
Composing soundtracks? Let us recommend some soundware →
Be the first to post a comment
0