I’ve been writing about synthesizers since the 1970s and reviewing virtual instruments since the 1990s. Still, when Audiofanzine asked me to pick my "top 5" software synths, it was no easy feat, as there are so many good ones to choose from. After careful consideration, I chose the five that I've found most useful in a variety of musical situations.

Although their prices vary considerably, all of them furnish exemplary factory sound libraries. All run as plug-ins in Mac OS X and Windows, and Kontakt and Matrix 12 V run standalone, too. If you use synthesizers for work or for play, you should find any of them appealing and inspirational. 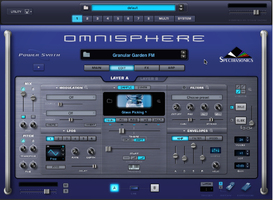 Omnisphere is my all-around favorite software synthesizer. Yes, it costs more than the others mentioned here, but I’ve found it useful in more situations than any other hardware or software synth I can think of. It supplies a massive collection of patches and a sophisticated architecture that facilitates deep, complex sound programming.

Omnisphere (whose second incarnation, Omnisphere 2, is expected out at the end of April) combines sample playback with algorithmic sound generation and also supplies a massive arsenal of effects processors. One of Omnisphere’s advantages is that it’s 8-part multitimbral. You can layer, split, or instantly switch between eight parts while performing live or play on eight MIDI channels simultaneously.

In this example, you hear a sound effect imported into Omnisphere from its predecessor, Spectrasonics Atmosphere.

Kontakt is the world’s most popular pro-level sampler for many good reasons. It comes with more than 43GB of samples covering over 1,000 instruments that encompass any musical style, including some very fine orchestral instruments. Kontakt’s versatile synth engine delivers all the bells and whistles you could want, making it ideal for customizing the factory content or rolling your own. Plenty of terrific third-party content is available, too, from soundware makers such as Heavyocity, Soniccouture, and ProjectSAM. 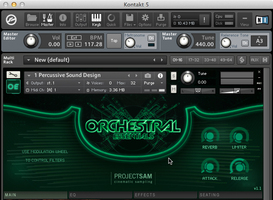 Do yourself a favor and spend $100 extra on Komplete 10, a bundle that not only includes Kontakt, but also Absynth, FM8, Reaktor, Massive, and tons of other top-shelf virtual instruments and effects processors.

Kontakt comes with a tremendous variety of sampled instruments, including this baroque harpsichord.

Like most samplers, Kontakt offers an ample selection of drum loops. Here's an example:

Don’t let the bargain price fool you. SynthMaster is another soft synth that covers all the bases, both in its factory content and such extensive modulation capabilities that it’s almost a modular synth. You get a versatile architecture with multiple synthesis engines (including virtual analog, additive, wavetable, and sample playback), loads of filter types, and eight envelopes for each of two independent layers. The ability to save and recall partial presets—settings for just the filter or the modulation matrix, for example — is a real time saver for creating your own patches.

SynthMaster comes with 800 presets, or you can purchase it with any 150 additional presets you choose for $129. Better yet, get all 1,700 expansion presets in the Everything Bundle for $379. 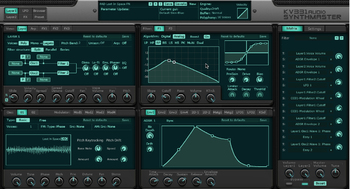 SynthMaster can produce some awesome pads, like this one called Lost in Space FN.

Arturia is best known for accurate digital emulations of classic synthesizers. They’re all excellent, but the latest, Matrix 12 V, is over the top in its virtual re-creation of Oberheim’s rare mid-’80s masterpiece. I owned a Matrix 12 for years, and Arturia’s version captures the original’s character and creamy, dreamy sound as effectively as anything the company makes. As you may guess from the name, the Matrix is all about modulation capabilities, and V’s modulation page is easier to maneuver than the hardware ever was. I highly recommend spending $399 to get the entire V Collection, which includes all of Arturia’s virtual instruments. 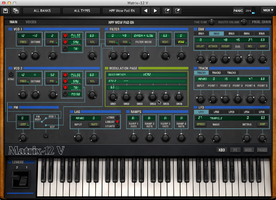 HRF Wow Pad EN is an excellent example of just how much Matrix 12 V sounds like the original Oberheim Matrix-12.

A generous assortment of presets will having you turning to Matrix 12 V for solos, basses, pads, and a lot more.

Although every one of u-he’s virtual instruments are well worth having, the one I use most often is Diva. To my ears, Diva proves that a soft synth can sound 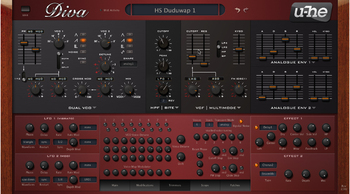 every bit as rich and warm as a real analog synth for a lot less money. Unlike plug-ins that offer numerous sound engines or emulate specific hardware instruments, Diva does one thing, and it does it extremely well: analog modeling. It succeeds by accurately simulating a variety of hardware circuitry using techniques pioneered for industrial circuit design. This approach is CPU-intensive, but Diva provides an option to diminish the sound quality, if needed, and it always sounds amazing.

Diva’s sounds are warm and vivid. Here's an example:

Some of Diva patches simply beg to be played, like this one called HS Duduwap 1.

Geary Yelton is the former senior editor of Electronic Musician, for which he's been writing continually since 1985. He authored two editions of The Rock Synthesizer Manual and served as staff synthesist for three major Atlanta recording studios. Currently, he's a freelance writer and consultant for the Bob Moog Foundation in Asheville, North Carolina.