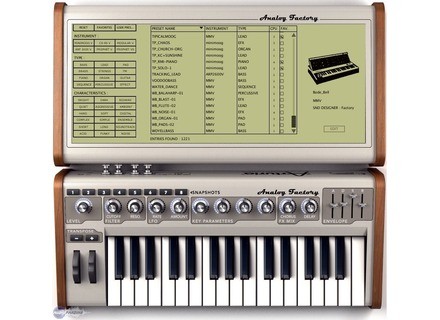 View other reviews for this product:
Easy to install, a bit long for a vst (many preset loaded) the only worry is the key synchrosoft to install no problem but I find that being forced to put each time on his computer before play is very shit. I do not mind that secures their software but if you lose the key you can play more, better not think it happens not before a concert ........

I have a computer of 1.7 GHZ, 1 GB of RAM, a Dual core processor
The software works well, it is very powerful, but in spite of my 1 gig of ram, as soon as I open it on my general sequence occurs in at least 15%, for a vst's a lot, but the config is stable ... ... presets as the power varies

I use it for a year
presets that are programmed to sound quality, very warm sound.
the original presets
the presets are organized by type of synths (ARP, Minimoog ,.....)
by prog (sequencer, bass, string,
they are also classified by style (soft, hard, grouve, bizarre)
In addition Arturia has paid particular attention aesthetics
more free update (it now stands PRESETS 3500) until

to conclude after one year

that offers analog sounds are very good factory manufacturing, the presets are very recent,
but it is a bank of preset, there are few adjustments and little opportunity to really change them.
Analog Factory really uses a lot of power
If you want to do a song in a program that supports vst
With 3 tracks already more power is reached very quickly in 70% more cpu it must charge all presets to each piece reopened, sometimes up to 20 seconds of waiting which is still good long but good arturia have always made good software but demand for power, too much power.
See the source
Did you find this review helpful?yesno
Cookies help us improve performance, enhance user experience and deliver our services. By using our services, you agree to our use of cookies. Find out more.