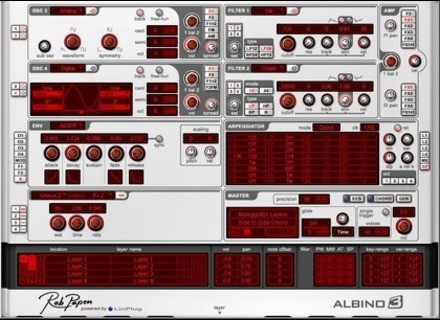 View other reviews for this product:
Albino 3 is created by LinPlug, I have used several other Lin Plug stuff before and they never fail me. They have always stayed on top of technology and making sure they keep the latest and newest effects and sounds over everyone else. Rob Ppaen is the creator behind Albino 3 and the thing about Rob Papen is that he is a great sound designer and has been doing it for so long now. That is the reason why I purchased this software, just because I know Rob Papen is behind it and anything that he has his hands in I will purchase because the stuff he can create is awesome.

The software is pretty easy to get started with and up and running. It has a tone of sounds and presets that you can use, and surprisingly it didn’t take that long to install onto my dual core pc running vista. I have used it in several different sequencing programs and daws and having had any issues with it yet. But if you start to run a bunch of different Albino 3’s at the same time in the same session it can slow your system down some, but that’s probably just because its just so large of program, so I usually will just track out the sequence that I recorded with Albino 3 in .wav format, then just bring the wav file back into the sequence and delete the original albino 3 plug in. Doing this saves me a lot of cpu from time to time when I need it during the creation of some of my more indepth songs.

Overall, its made by Rob Papen, so you know you are going to get a great synth plug in. This is a no brainer and a must have for your vst arsenal. Buy it