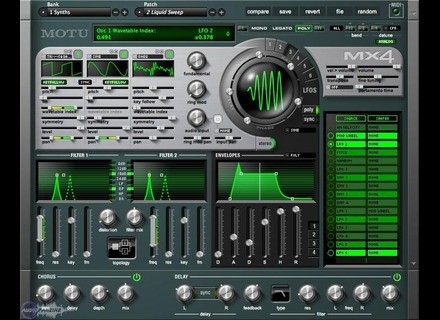 View other reviews for this product:
MOTU MX4 is a virtual synth plug-in with some really good presets, it can only be used on Mac computers and it is currently on version 2.2 (at least). This is a “hybrid” synth that basically brings together every type of synth you can think of from FM, to AM and Subtractive. This version of MX4 has some really good factory presets in it that the previous version did not have. There are not a lot of new presets that are worth bragging about but there are some that really shocked me. There are a lot of reverb options and even phaser types in MX4 v2.2 that were not in the earlier versions so it was a huge bonus to get some new effects along with the presets. Editing your presets are still pretty much the same with the new version, even working with the arpeggiator is still basically the same.

This version has two filter modes that will give you all control over the high pass, low pass and band pass. There are a total of 16 filter effects that you can use at the click of a mouse with no effort needed. This synth is very easy to work with and program. If I could make a change to it, I would suggest some more ambient effect presets that are outside of your standard reverb effects. I think that would take this synth to another level. Maybe they will include some in the next upgrade.

Though this synth is very good, I do not think it is worth the 300 bucks that it cost when there are about 25 other synths that are out for both Mac and PC that will give you a lot more presets and effects to work with. This program is very stable but it feels to limited to me, they should get some more effects in it, make it compatible for other platforms then maybe it will be worth that price.
Did you find this review helpful?yesno
Cookies help us improve performance, enhance user experience and deliver our services. By using our services, you agree to our use of cookies. Find out more.