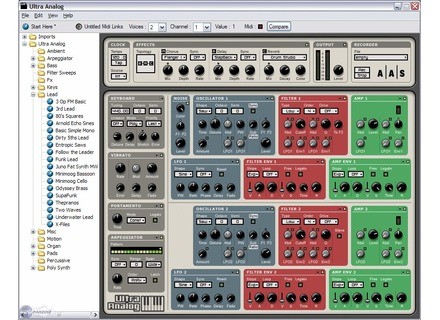 View other reviews for this product:
Installed without problem on Vista

I test the dmo an hour no more
Here are the presets main headings:

Ambient: not bad but is not a + Absynth Native Instruments FM7

Arpeggiator: all products as AAC, AAC seems to like reverb apply its not super enjoyable (I think) sounds. An offensive against Absynth I think it also applies its Famer reverb and compression that "fact" sound native. The arpeggios are pretty cool anyway

Bass: For presets go your way! is more than average. Many plugs in this free Exceeds quality. Now working all this, there must be a way. But it is flat!

Effects: it's funny, more and more sounds j'coute "Korg" this plug. The effects are nice but a microKORG can reproduce most of the presets "EFX" with only two CSOs.

Keys: blah blah ... if there were no effects, nothing will remain ... the choice is low. AAC n'tait not inspired on that part! Take a Pro-53 will be better!

Leads: what about ... it's not bad but again, you enlves effects and lots of water presets fall.

Orchestral: good potential, but why on earth a dozen presets! snif!

Pads, and some nice pads. But nothing is changing other VST on this sector. It is not "bluffquot;!

Rhythms: The ide is good but a little Intgr sequencer would have to use the beast by transforming it into small Microtronic!

Polysynth: D50sweep? ahah, AAC does he have had a D50 in their studio dv?? Otherwise nice, but the presets same, not break the shack as I expected

Vocal: 5 presets? AAC not inhale either yet there were things to do!
I am more than lukewarm about this product (given the price: 159 March 2008). Of course one can criticize my criticism (and a state of the premises). It is not complete. This type of product that MRIT working on it to get (probably) most of it. Being also the gnration "hardware", many synths taient often on offer with presets trs means. Now my criticism is positioning itself to someone who had other plugs and buying this app share in FDI in first to use the presets on offer (and often of good quality especially in the VST or G-Media Native Instruments).
See the source
Did you find this review helpful?yesno
Cookies help us improve performance, enhance user experience and deliver our services. By using our services, you agree to our use of cookies. Find out more.