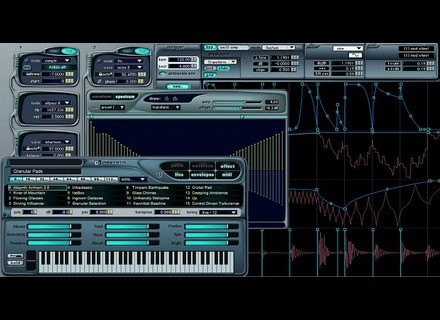 View other reviews for this product:
Included in the NI Komplete 2 Bundle, Installation is as simple rvle all.

I have not opened the manual once, it comes with the bundle is, after all K2 succinct.

M on a PIV 1.4 Ghz, Absynth 2 consumes few resources and it has a trs good news. We feel that dveloppeurs have optimized DSP algorithms to a minimum.

Absynth softsynth is the ultimate. Of course, compared to other softsynth's market it's really not easy handle. It is better to have some knowledge of sound synthse before launching. Not recommended for beginners so ...

The presets refltent some capacity (as often elsewhere). All these features make it a limitless (FM, samples, synthesizers granular, additive, comb filter, waveshaping, wave the cursor drawing ...). Among the presets is reconnatra imitations PPG, DX7, Wavestation (plus ct synthse squence wave vector that) ... the list is long trs. Brief but good.

Used extensively on the last album the group Yello.

I like least the graphic interface and it sounds a bit cold, but hey it's a matter of ear.
See the source
Did you find this review helpful?yesno
Cookies help us improve performance, enhance user experience and deliver our services. By using our services, you agree to our use of cookies. Find out more.