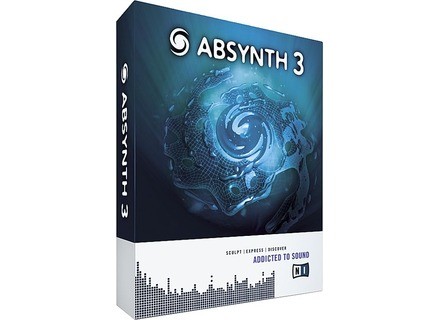 View other reviews for this product:
Native Instruments Absynth 3 didn’t surprise me at first glance but after really digging in and using it for a while I got the hang of how it works and how to really change the sounds to the way that I want them to sound. Without needing any knowledge of sound creation or sound design I was able to really get in there and change the parameters of the sounds and make them my own (because I hate having to use presets over and over ) The layout of Absynth 3 isn’t confusing if you have some basic understand of vst’s.

Setting it up was really quick, I just inserted the disk and waited a few minutes I actuall think that it updated some online as well just to have the latest tech stuff. I also needed to create an account at NI website when I purchased this.

Overall, I was very happy to have a program that didn’t confuse me that I can used often and has some really good synths which is what I was looking for. As far as the synths go, I think they could be a little fuller sounding some of them are really thin and I had to fatten them up with some equine and some effects. But the program has worked for me perfectly and hasn’t froze or crashed at all and it doesn’t seem to look like it will. Also, I run multiple versions of it at the same time and it doesn’t take up to much cpu unless I use some of the presets that are very cpu heavy then you can start to tell. The price for Absynth 3 isn’t cheap at all , if you are looking for a cheap vst look around online and don’t just go buy this one. It will take a little time to understand and you don’t want to invest 300 or more dollars on something that will leave you confused at first.