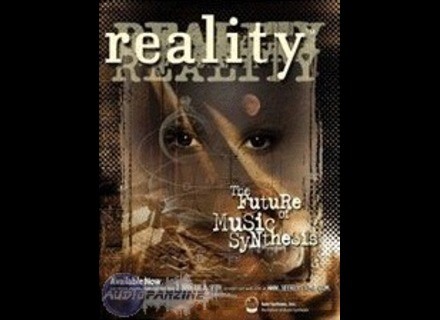 - The installation is done it without problems?
installation was evident, no prob, Windows 98.

- Have you experienced any incompatibilities?
I put 3 / 10 because it is totally incompatible with Win XP,
(Even with the wildest stuff)

- The general configuration is easy?
yes

- The manual is clear and sufficient? ...
I can not remember the manual.
online help is sufficient.

- What is the configuration of your computer?
(Motherboard / CPU / Ram / Disk / sound card ..)
so that it works properly, we must win 98.
thus requires a computer capable of running win 98,
ie an old PC, because modern PCs simply will win 98.
you need: a Pentium II or Pentium III 350 700, for example,
with an ASUS motherboard choice for boys, girls ABIT.
RAM: not a lot required, 128 or 256 MB enough
Direct Sound compatible sound card required, otherwise there is no salvation.
Programmers refused to wear Reality in VST mode

- The software works he correctly on this configuration?
yes it worked flawlessly, until my return to the studio,
the computer that took the Lightning, Reality has become ... a gust of wind
(I paid the price sold on the site, in 1999)

- What performance? (If quantifiable)
When it works, in 1999 it was very good ...
until I want to use Cubase VST 5 with VSTi plug.

No, because today this configuration is botched.

- How long have you use it?
Reality I could use between 1999 and 2000 to compose a few pieces.
Since then I went to the VSTi I do without the songs to Reality
following.

- What is so special that you like most and least?
in 1999, Reality was a pioneer and the best existing software synthesizer.
So I used a number of sounds with, and then I regretted it.

- Have you tried many other models before buying it?
At the time there was not much choice between "Probe" and others "VAZ" much less made at the time.

- How would you rate the quality / price?
- With experience, you do again this choice? ...

Surely not.
Today, I exclusively buy VSTi synths,
because it is a standard. So assured reliability over time.

I conclude that for me, this software was a scam:
programmers promised a VSTi version in the summer of 2003, they never wanted to leave, for reasons of orgueuil small computer:
"Our Reality works in 64 bits while the VSTi format works in 32-bit only".
Indeed: a WAV file from the output of Reality was done in 16-bit / 44.1 stereo.
Also today, the resolution of Reality is not even equal to 8 bits 16 Khz, but 0 bits since silenced.
Then simply go to their site to see how rough they have withdrawn from the market. I think we can not even know the names of the programmers: I hope for them anyway.
I note, therefore, a 0 / 10 as we are today.
Certainly in 1999 I noticed a 9 / 10 until credulously VSTi version.
See the source
Did you find this review helpful?yesno
Cookies help us improve performance, enhance user experience and deliver our services. By using our services, you agree to our use of cookies. Find out more.