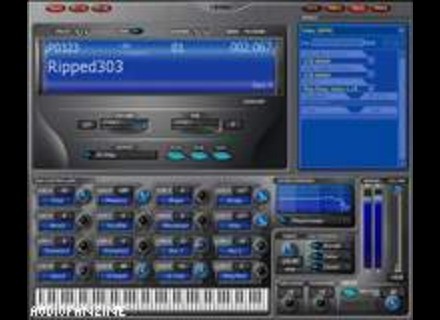 View other reviews for this product:
I devote myself since there is no opinion, but I still have to study the thing and I saw him later:
- I found the installation and operation capricious
- General configuration not easy interface unclear.
- The manual is tedious

- My computer configuration is poor and the rich do Proteus!
- I open two channels (when I get there) and it's over, it cracks everywhere, the CPU is full
- Performance? um what does that mean here? When it works it's not bad ....
- It is not stable, if I delete an insert on my soundcard (EMU 0404 another gas plant this one) it crashes the ASIO (Cubase) you must close and reopen the project (not pleasant hum)

- I use it since I managed to install it already is, and uh pretty disgusted I am interested only recently but it's worth
- The characteristic I like most is the quality of sounds that are quite valid, but disjointed, it's a VSTi original, unconventional, in fact quite good.
- I got it bundled free with my sound card 0404 so I'm happy, plus I bought a Xboard49 and I had three of its banks and more here worth now that's why I try to use it.
- The value for money? hey super gratos!
- You do again this choice? I did not choose but I'm glad.
Good! ^ actually it's not bad, very complicated in against a Boeing interface, all in English, especially a lot of fluff that it does not work very well, if the sounds are really interesting and quite original, but damned difficult, I account to use it very actively within the limits of my CPU because it eats a lot with cymbals such but rather against it good, original sounds and surprising I must say.
The fact is that I will try to use it regularly because I get sounds quite dynamic, complex, realistic and relatively new compared to my usual expander, can be also that I do not know yet but the master EMU ... . ooh la la what is it complicated! they do not know how simple ... ... but it is powerful when it is not planted.

Since I saw that you could download a free Proteus VX, here I seem to be exactly the same thing
See the source
Did you find this review helpful?yesno
Cookies help us improve performance, enhance user experience and deliver our services. By using our services, you agree to our use of cookies. Find out more.