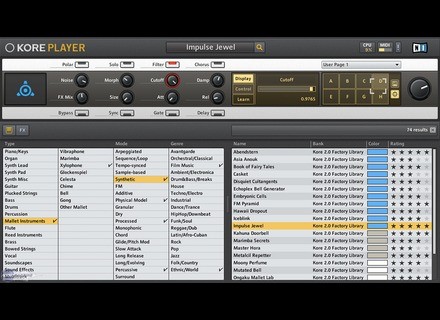 View other reviews for this product:
Native instruments Kore player was a virtual synth that I downloaded for free years ago and still use it today. To actually get the module itself is free you can download it. But to have more packs and sounds you will have to pay for those. I downloaded a strings pack for about 45 dollars which wasn’t bad at all. Kore player gives you a few options at the top to edit and manipulate the sounds a little bit but it really doesn’t give you full control of how the sound will come out. I wish it had some EQ options built into it so I didn’t have to do all of that from the mixer tracks.

Software runs good though, never had a issue with it and never will. I have been using it for a few years now and not much has changed and I don’t think they have come out with a new version of it. For some reason I think it is discontinued or something because even on the website it isn’t available to download (at this current moment. ) So im thankful I already have it in my computer.

I like how easy it is to use, it doesn’t take any effort to get to what you want as far as sounds go. Changing some sounds doesn’t take any effort either because you don’t have many things you can do to change them. I wish they would put out an update changing how long it takes to load up some of the sounds. Not the sounds that come with it, but I have some string patches that take 5 to 10 seconds to load after you click on them. that’s way to long it should be instant! Hopefully they fixed in the newest verson from Native instruments sooner than later.