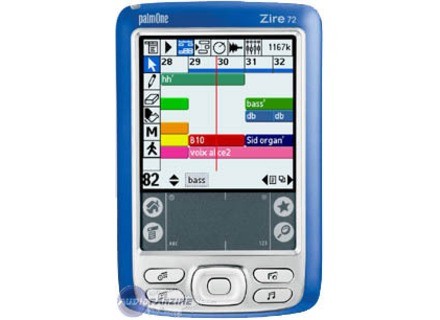 View other reviews for this product:
Nothing more simple, we install:
-The program, plugins and sound banks by Palm Desktop
One copy of the library of plugins and the synchronization conduit in the Palm folder on the PC, double-click on a file cre Install.bat synchronization rcuprer tracks in WAV or MIDI .
The interface is a clarity rare for a PDA program, like Cubase found patterns in the form of colored bars, one passes the grid by clicking on the icons at the top of the screen, enter notes by hand is much easier that the mouse, a keyboard on the left side helps us makes case notes. To make a note of more than one time just to continue the pen pressure on the grid. With the quantization precision is achieved remarkable of all 32 of 4 times.
The editor of sample, with the pen is a delight, determines the point of closure t has never easier.
CHAC Mix, rglage effects and even the knobs for live performance is suited to touch screen. It is surprising the work

Bhajis Loops supports Palm OS 5, this means that it works as well on a Treo 600, Zire 31 as a one Tungsten T5 not to mention the Cli OS 5. The processor speed determines greatly the performance (number of votes, rels time effects etc.).. For example a 400 MHz over 14 grate voice without problem, with a 144 Mhz one feels the limits of del 4-5 vote.
If the power limit is the Palm (I have a Zire 71 144 MHz) it is better to avoid too many simultaneous effects, for example I programmed a song with several drum patterns made from four samples (BD, SN, Hi-Hat, Ride) with an effect on each (adjustable from the virtual mixer) and 2 THEME made from two samples, one with a delay . In total 6 votes and 5 effects, excluding the panning, started rowing.

I use it for 5 months, I started with version 1.2, dj grait a dozen plugins, there is the 1.4 in beta, MIDI has added between t time (in 1.3 import, export format in the GM 1.4), it becomes possible to work on the Palm or resume work on the PC.
What I like most is to have in a space as a bank Reduces samples, the choice of WAV or MIDI, the time saved thanks to the stylus, a mouse more efficient , intuitive interface so we do not need to read the manual, the sound quality on which no compromise has been t.
Bhajis Loops for me is the cross of Ableton Live and Cubase, all in Palm format.
New versions appear regularly, provided with options that require users on the forum. The dveloppeur trs is accessible and requires only 22 euros by Paypal (26 by commercial sites), the updates are free.
See the source
Did you find this review helpful?yesno
Cookies help us improve performance, enhance user experience and deliver our services. By using our services, you agree to our use of cookies. Find out more.