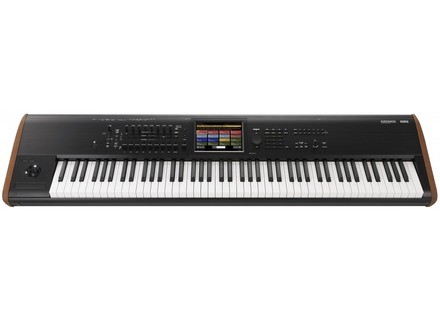 [NAMM] The Korg Kronos will ship in February

Korg is showcasing on its booth at NAMM 2015 the new Kronos we talked to you about last November.

You can record 16 audio tracks and sequence 16 MIDI tracks, to which you can add any of the 16 effect processors.

Connections on the new Kronos include a USB/MIDI port for adding control surfaces (Korg microKEY, NanoPAD 2…), MIDI in, out and thru, 2 switchable mic/ligne audio inputs with dedicated levels, 4 mono audio and one stereo L/R inputs, three jacks for external pedals and an S/PDIF digital in and out.