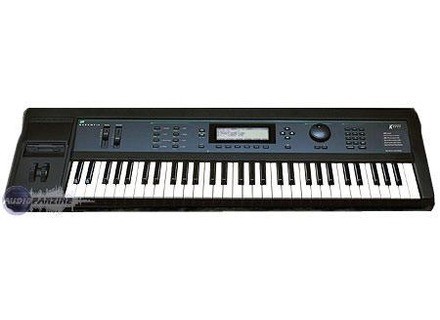 View other reviews for this product:
Front - back cover - controllers 9 / 10
-------------------------------------------------- ------
opportunities of Espression K2000 VP is a little more comprehensive than the majority of his friends. is a versatile keyboard. 61 notes with aftertouch, pressure sensitivity. faade on the front, it has a pitch wheel, a modulation, a controller noon.
behind it was (among others) 3 programmable footswitch, sustain, 3 Stereo audio outputs (including 2 dry), headphone etc..
what is good in the K2000 is the possibility to assign controllers filters, algorithms, etc. from noon. as I said, versatile, versatile.
there is still something of the faade Dranga before it buttons.
I had two K2000VP was the conclusion is the same, it does not work great. it's pretty boring on stage. you think you have supported ...

effects 8 / 10
----------------
the effects are good enough in my taste quality but fairly traditional (such as a delay is given in milliseconds, it would be the IAM as bpm): reverb, delay, chorus ... I find that the effect parameters are not numerous enough, the effects themselves are difficult to program. digitech it has a chipset dvelopp Designed and effect for the K2000. when we know the quality of the effects produced digitech, one wonders.

edition books and 7 / 10
----------------------------
cot manual is quite complete but the "Classic" home "Chianti", a musician would expect something a little more fun with examples, sounds can be a disquetted'aide ... Men short manufacturers, when you understand that musicians are to play and not for the sinuses STUDY ... make us instruments and manuals LEISURE (mess

good on the other hand bin is full and you can do anything. once you understand how it works. (I have not yet fully understood ...)

That's the Athniens s'atteignirent ...
we enter the heart of the matter, it's still an instrument sound, and it touches the point "G".
the sound can be measured curves and bruising after his science and then there are the ears.
For me, the K2000 possde an unusual dynamic, a quality of sound that MRIT respect.
the sound is clean and crystalline. there is energy, potato.
and that is why we choose a K2000, given that it is a sampler, you can imagine all you can do with it. I had an Akai S2000 (Akai DSOL sir, but you can store yer Bitonio) I had a Yamaha A3000 (hou hou ca ugly ugly !!!), I have not tried blowing EMU, in my opinion it should not be too bad (but where's the keyboard?).

4 years ago I bought a K2000VP and then the second one I have purchased them over nine!
what I love most: versatile and sound -
what I like least: the fucking buttons on the front of the bugs and effect processor
report quality price (ah ah ah) of OCCAZ yes - simply unbeatable.
well I just bought a second so you tell me?
See the source
Did you find this review helpful?yesno
Cookies help us improve performance, enhance user experience and deliver our services. By using our services, you agree to our use of cookies. Find out more.