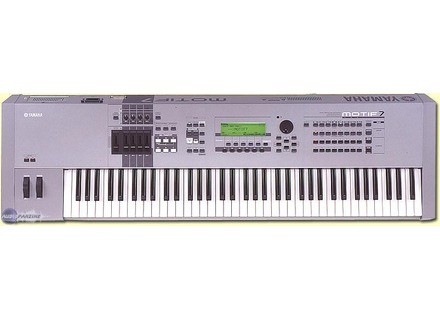 MOTIF 7, Workstation from Yamaha in the MOTIF series.

Cr of keyboard after me for the Techno and Rave, but any kind of music is possible.

Some sounds are polyphonic and other NONS. But said what kind type, ca, I do not know.

Yes and no setup is simple. For some who are used to the new Roland Fantom and Fantom X, yahama not seem to be the best workstation and yet it is possible to do everything with.

Performences rapidly it is impossible to change the sound. There is no sillier than that. It's really not well thought out. For effects, I personally do not like as a single track / section may contain an effect, and a single effect, usable at a time. It's con ...

The manual said and it's pretty clear I think. Indeed

Everything I expected from this keyboard is RALIS. Indeed, it is a good Workstation. The sequencing is perfect just read the book.

The Veloci aftertouch is good.

Since March 2004 I love this instrument, so far I do not expect me to buy a new one.

The edition for the recording in "song" is not too easy. C, I would say is rather enmerdant and even sometimes impossible. Parcontre in everything is beautiful pattern.

The fantom and triton, and a lot of time, I have used. The Triton is impressive but not enough compared to me after the Yamaha Motif.

I strongly advise you aquérir the Yamaha Motif ES (the ES is exellent)
See the source
Did you find this review helpful?yesno
Cookies help us improve performance, enhance user experience and deliver our services. By using our services, you agree to our use of cookies. Find out more.